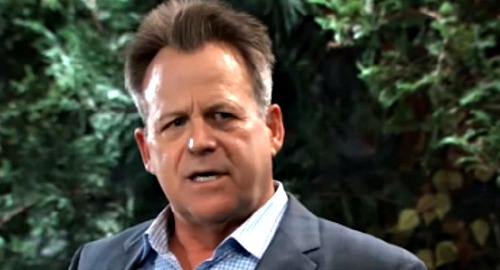 General Hospital (GH) spoilers tease that Scott Baldwin (Kin Shriner) is seen on canvas these days mostly in his role as Franco Baldwin’s (Roger Howarth) dad or as a lawyer. In fact, the last big case that Scott took to court was when he represented Elizabeth Baldwin (Rebecca Herbst) in the case in which Elizabeth wanted “Drew Cain” (who was actually Franco) to have a procedure to turn him back into Franco.

Scott really messed up in that case when he didn’t check with Kevin Collins (Jon Lindstrom) about the nature of his testimony before he put Kevin on the stand. Kevin ended up providing testimony that directly undermined Scott’s case, and the whole thing was entirely preventable.

But other than that big courtroom debacle, Scott generally does a good job for those he represents. And in a recent interview with SOD, Kin Shriner weighed in on his decades of playing a lawyer on TV.

In fact, Kin started portraying Scott when Scott was still in law school, and Kin mused in the interview that he was once sitting at a restaurant preparing to go to GH to film, when some lawyers actually came up to him and told him that they watched General Hospital, but that it was totally unrealistic for Scott to get his law degree in merely two episodes.

Kin also reported that he thought he’d love to take on another run as Port Charles’ district attorney. Of course, as GH viewers know, that seat is now occupied by Robert Scorpio (Tristan Rogers), but so far Robert hasn’t made much of a stand against Port Charles’ newest threat – Cyrus Renault (Jeff Kober).

Mayor Laura Collins (Genie Francis) certainly wants to rid Port Charles of Cyrus, but so far, she and Robert haven’t formally teamed up to make that happen.

Who knows – maybe Scott would be up for a stint as an Assistant District Attorney and he could work with Laura on the Cyrus problem. Of course, that would mean that he would work under Robert, which could get hairy, since the two men have such strong personalities.

During the interview, Kin was asked directly about all the legal dialogue that he faces, and whether he feels pressure to get it all technically right, and he admitted to “Scotty-izing” the dialogue a bit, as well as occasionally hiding a script in the courtroom desk.

“Yeah, you have a drawer right at your seat there,” Kin said. “So you open the drawer and put your script in there and just close the drawer.”

Finally, Kin was asked whether he would hire a Scott-type lawyer if he was in need of legal assistance. Kin said that he’d “like a lawyer like Scott Baldwin that’s got tricks up his sleeve…he looks like he’s in charge.

He’s a highly paid lawyer that comes in and gets the job done.” In fact, Kin even said that Scott still firmly believes that Sonny Corinthos (Maurice Benard) belongs behind bars – which could make things interesting if Scott ever were to get that DA gig again.

We certainly hope to see more of Scott in action once the new GH episodes pick back up. His blustering and appeals to the court are one very enjoyable part of the show. Do you enjoy watching Scott defend his clients? Stay tuned to the ABC soap and be sure to keep CDL bookmarked so you don’t miss any of the latest General Hospital spoilers, updates, or news.