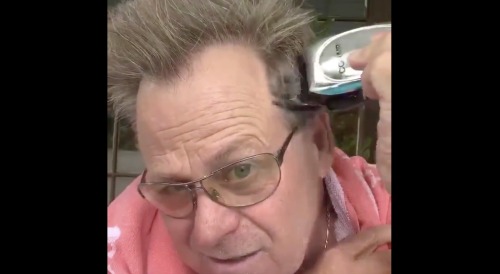 General Hospital (GH) spoilers reveal that one ABC soap star recently shared his hilarious haircut mishap. Since GH has suspended production due to COVID-19 aka coronavirus concerns, many cast members have been connecting with fans a bit more and trying to provide a few laughs. Kin Shriner (Scott Baldwin) certainly did that with a funny new video he posted on Twitter.

In the clip, Shriner offers some pointers as he tries to give himself a haircut. Unfortunately, things don’t go quite as planned. “As you know, I got my barber’s license back of a matchbox cover some time ago,” Shriner joked. “I believe I got my law degree there, too. But the trick to self-haircutting is know your guard. You start high like with a four or you’re daring and you just go right to the two.”

Shriner decided to be daring and it didn’t work out too well for him! “So I’m gonna just start with the two and see what goes on here,” Shriner said. “So just a quick…there we go…there we go… Well, that looks worse! Now I gotta go up!” Shriner’s video cuts off as he stammers over trying to even out his messy haircut attempt.

Maura West (Ava Jerome) took the opportunity to tease Shriner in the replies. She wondered why Shriner’s girlfriend wasn’t intervening in this haircut catastrophe! “Jeez, Kin,” West tweeted. “Where the heck is Trish stop you from yourself?”

Shriner replied, “Iam the one with Barber license but thanks @MauraWest for concern !” West kept the fun exchange going with one more comment. “Shoot…you have a license? Can you do my roots, too!??” West said. It’s always nice see General Hospital stars joking around and showing that they’re great friends in real life.

Of course, plenty of GH viewers would like to see a little more Scott onscreen. Let’s hope Scott will get back in the action a bit often down the road, but we can enjoy Shriner’s haircut disaster video for now. Shriner described this video as “haircut goes horribly wrong” in his tweet, but at least fans got some entertainment out of it!