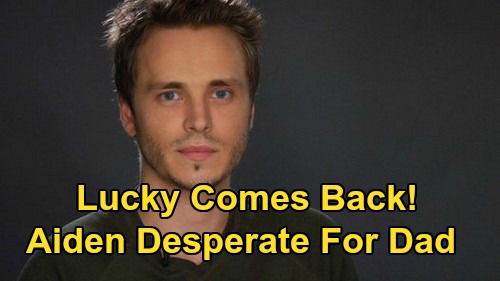 General Hospital (GH) spoilers tease that Aiden Webber (Jason David) could soon be in serious need of his father. As GH viewers know, things haven’t been looking great for Elizabeth Baldwin (Rebecca Herbst) and Franco Baldwin (Roger Howarth) as of late. Elizabeth and Franco just haven’t been connecting lately, and they’re having a major disagreement about how Ava Jerome (Maura West) is creating buzz about Franco’s past in order to promote her portrait unveiling.

And at the same time, Nikolas Cassadine (Marcus Coloma) is around and offering friendship to Elizabeth, which doesn’t really make Franco happy. It’s just a big mess, and it seems that some serious problems could be on the way for Elizabeth and Franco, especially if Elizabeth keeps seeking comfort from Nikolas, while Franco and Ava’s friendship grows stronger.

In fact, we wouldn’t be surprised if we see some more serious estrangement between Elizabeth and Franco, and we have to wonder what that’s going to do to the boys.

Cameron Webber (William Lipton) would certainly be bummed about the whole thing, since he’s really come to love Franco. But probably the one who would be the most disturbed by a Franco/Elizabeth estrangement would be Aiden.

Aiden has made great strides in the past year. He struggled with being made fun of by the other kids at school over being “different” because he likes baking and things not considered traditional for boys.

But Aiden seems to really have come into his own, largely because of Franco’s good influence in his life. What would happen if Franco suddenly had to move out because of problems with Elizabeth?

We could see Aiden start to struggle again, which could set up a major GH return. Fans have been wondering lately whether Lucky Spencer (Johnathan Jackson) might be up for a return when the show picks back up, and some problems with Aiden would seem like something that could get Lucky back in town.

An issue with Aiden, in addition to Nikolas’ recent return, might just be enough to get Lucky to return.

Of course, there are scores of GH fans who would love to see Lucky make a comeback on the show. The timing would seem right, and if Aiden is to go through a crisis again, it would be the perfect time for Lucky to resurface.

Also, before the show went on hiatus, there was a lot of talk about Luke Spencer (Anthony Geary), which could be signaling not only a Luke return, but a Lucky return as well.

If Lucky were to return, that would add a whole new wrinkle to what Ava is trying to accomplish. As GH viewers know, Ava would like for Nikolas to get together with Elizabeth, because if Nikolas cheats, then Ava gets the bulk of the Cassadine fortune.

Throwing Lucky into the mix could set up a Lucky/Nikolas/Elizabeth/Franco quadrangle, which could force Nikolas to admit his feelings for Elizabeth sooner rather than later.

We’ll see what happens here, but in thinking of a way for Lucky to come back, a problem with Aiden resulting from Elizabeth and Franco’s problems seems like a reasonable avenue for that.

Do you think that we’ll see Lucky return to Port Charles to be with Aiden? Stay tuned to General Hospital and be sure to keep CDL at the ready for all your current GH spoilers, news, and updates.