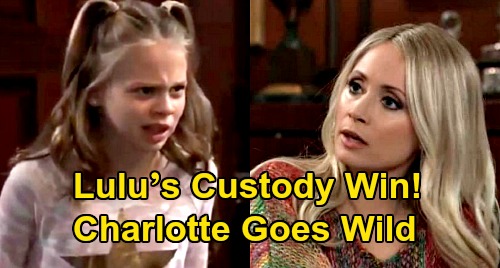 General Hospital (GH) spoilers tease that Lulu Spencer (Emme Rylan) should careful what she wishes for! GH fans know Lulu’s on a mission to keep Valentin Cassadine (James Patrick Stuart) away from Charlotte Cassadine (Scarlett Fernandez). They’ve been gearing up for a fierce custody battle, but it may or may not get that far.

Regardless, Lulu seems poised to get her wish. There’s a good chance Charlotte isn’t Valentin’s biological daughter, so that could completely change the game. Valentin would have no rights to Charlotte, so Lulu could breathe a sigh of relief about eliminating the threat.

However, Lulu doesn’t seem to be taking her daughter’s feelings into consideration. There’s nothing Charlotte loves more in this world than her papa. Charlotte’s already been through a ton of emotional turmoil due to not one, but two failed “Valentina” weddings.

Charlotte’s family with Valentin and Nina Reeves (Cynthia Watros) has been ripped away, so it’s been a lot for the poor child to deal with.

Charlotte even cut up Sasha Gilmore’s (Sofia Mattsson) picture since she blames her for being the start of all the drama. She’s too young to be brought in the loop on all Valentin’s horrible behavior and probably wouldn’t hold Valentin responsible anyway.

Charlotte is loyal to her papa – and it’s doubtful that’ll change if a DNA test says there are no blood ties between them.

Lulu may score full custody and expect Charlotte to be a normal kid away from the devious Cassadine – or fake Cassadine as the case may be. She might encourage Dustin Phillips (Mark Lawson) to bond with Charlotte a bit and serve as a father figure during this difficult time.

You can bet Charlotte wouldn’t approve of that at all. She certainly wouldn’t like anyone trying to replace Valentin in her life.

General Hospital spoilers say this ordeal’s sure to be tough on Charlotte. Her world’s likely going to fall apart, so how will Lulu handle that? It sounds like Lulu’s dream come true could turn into a real nightmare!

Getting full custody may come at a high cost, especially when it comes to Charlotte’s well-being. General Hospital spoilers say some great twists and turns are ahead, so don’t miss all the action. We’ll give you updates as other GH news comes in. Stay tuned to the ABC soap and don’t forget to check CDL often for the latest General Hospital spoilers, updates and news.