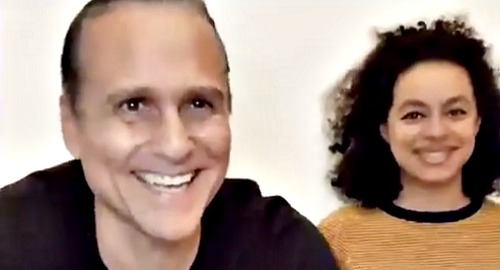 General Hospital (GH) spoilers has some wonderful news to pass on about a popular GH star. Maurice Benard, who portrays Sonny Corinthos on the ABC soap, has welcomed his first grandchild to the world.

Maurice’s daughter Heather Andresen gave birth to little Eloise Andresen on October 2. From the looks of it, Heather, her husband Phil, and baby Eloise are all doing well.

As you might be aware, Maurice has a YouTube series called “State of Mind” in which he discusses mental health issues and wellness. Well, in his most recent episode, he invited his daughter Heather – who was still pregnant at the time – to join him for a chat.

In the caption, he referenced the birth, saying: “Miracles do happen. Congratulations @leftyandresen and @philthedreguy.”

Then, in Maurice’s Instagram stories, he posted a sweet picture of Heather, Phil, and Eloise shortly after the birth, along with a message saying that he was incredibly happy to announce the birth of his granddaughter, who was born on October 2 at 4:20pm.

After the birth, Maurice replied to a fan’s tweet about the birth and to his “State of Mind” episode that included Heather. Maurice tweeted: “My daughter @HeatherBenard is calm as a cucumber like I said she always reminded me of @DianaRoss her baby is absolutely beautiful.”

Fans have been replying to Maurice’s social media messages about his new granddaughter in droves, and he’s getting lots of well-wishes and congratulations. For example, one fan commented: “Congratulations! What a blessing, best wishes to your daughter and granddaughter.” And another fan said: “Mazel tov!!!! Best wishes to the whole family!”

Finally, someone replied by saying: “It’s a blessing beyond belief! And a little girl who will have her grandpa wrapped around her little finger with her first breath – bless you all and stay strong and safe.”

We wish Maurice the best as he takes on the role of grandpa, and our warmest congratulations to Heather and Phil on the birth of their adorable new daughter. Stay tuned to the ABC soap and remember to keep coming back to CDL for the latest General Hospital spoilers, daily episode recaps, and news.

For this week's @mbstateofmind episode I’m joined by my daughter Heather.