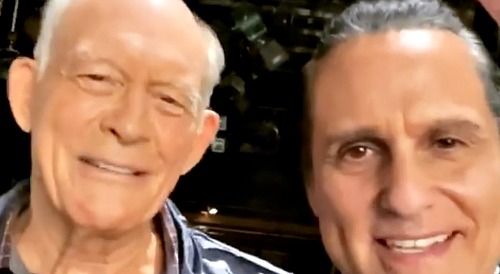 General Hospital (GH) spoilers has some heartwarming news to pass along about a couple of GH actors, one of which just wrapped up an amazing run on the ABC soap.

As viewers are no doubt aware, Sonny Corinthos’ (Maurice Benard) dad Mike Corbin (Max Gail) passed recently on the show, and it was the end of an emotional storyline about Mike’s battle with Alzheimer’s Disease and the effect it had on both him and his family.

Well, viewers have known that Mike’s death was imminent for a long time, but still, saying goodbye to the amazing Max Gail and his character of Mike is tough for viewers. It’s also tough for the actors, as they’ll no longer be working together in close proximity.

Well, earlier today, Maurice Benard shared a behind the scenes video of himself and Max Gail on Instagram that fans have been responding positively to. It appears that the video may have been taken on one of Max’s final days of filming, and in the video both Maurice and Sonny address the camera.

“All right, I just want to say to Max that I love him like a dad,” Maurice says. “He’s an incredible actor, and I’m going to miss him like there’s no tomorrow. What do you have to say, Max?” Max then jokingly says, “There’s a tomorrow?” That prompts some laughter from Maurice.

Then Max gets serious, saying to Maurice, “I love you man, it’s been great. You told me we were going to have fun.” Maurice says with a smile, “I told you, I told you!” 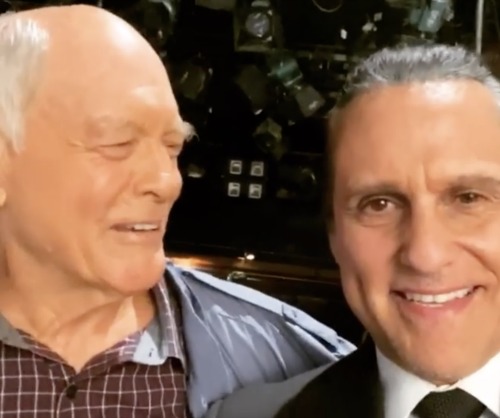 In the caption that he posted along with the picture, Maurice stated: “I think it’s once every decade you find an actor who changes the landscape. That is Max Gail. Thank you, Max, for always challenging me and making me a better actor. Go out and change the world!!! @alzassociation #family @generalhospitalabc #love.” Maurice then tagged several other GH actors and commented: “We all will miss you.”

Fans have been commenting in droves to Maurice’s tribute to Max. One person replied to the post and video saying: “So poignant, everyone was great, very moving storyline. Great to see the soft human side of Sonny. Bravo to you both.”

And someone else commented: “I have never written here or really anywhere. I was so moved by this storyline and the acting. The acting!!! Losing a grandmother to this horrible disease, you guys hit all the right notes and tones. Thank you for the work you do. We will miss #maxgail so very much. But as we know you are never truly gone in a soap!!!”

A lot of viewers shared these sentiments, and many said that they had lost loved ones to Alzheimer’s Disease and that they appreciated the realistic portrayal of the emotions and heartbreak that families go through. Maurice replied to many of these comments, thanking viewers for their kind words and support.

Max Gail will certainly be missed by his fellow actors on set, and viewers will miss seeing this storyline play out, but like all things, it was time for Mike and Sonny’s journey together to come to an end. We look forward to seeing what Max does next!

Will you miss Max Gail on General Hospital? Stay tuned to the ABC soap and remember to keep CDL bookmarked for the latest General Hospital spoilers, daily episode recaps, and news.