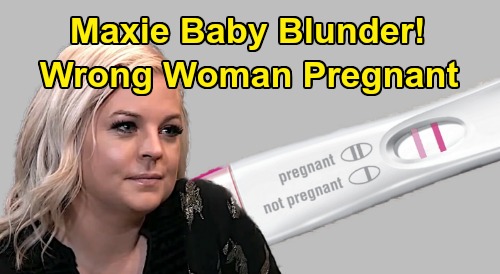 General Hospital (GH) spoilers reveal that many fans have been complaining about a recent story twist. GH fans know Maxie Jones (Kirsten Storms) exhibited some pregnancy warning signs and looked rattled over her calendar. Since General Hospital spoilers pointed to a character realizing she was expecting before new episodes ran out, Maxie is the one with a baby on the way.

However, plenty of GH viewers feel like this pregnancy was a bad idea. There’s no reason for it other than it raises the stakes and perhaps gives Peter August (Wes Ramsey) a path to redemption. Should Maxie have to pay the price for that?

If General Hospital’s going to give Maxie another baby, it should be with a man she can build a real future with. Peter doesn’t seem like that man since Maxie will probably dump him following his exposure.

Maxie’s already forgiven Peter once, so it should be a long time before she’ll even think about doing it again – if she ever does!

Peter could even wind up dead or in prison at the end of this storyline. That’d leave Maxie without a father for another one of her children. James West (Caleb and Kyler Ends) already doesn’t have his dad, Nathan West (Ryan Paevey), so GH could be setting Maxie’s family up for more pain.

Furthermore, there are so many better pregnancy options on canvas – women without any children at all for example. Just imagine Willow Corinthos (Katelyn MacMullen) learning she had Harrison Chase’s (Josh Swickard) bun in the oven following her marriage to Michael Corinthos (Chad Duell).

There’s also Sasha Gilmore (Sofia Mattsson), whose situation would become even more complicated by Michael’s kid. Molly Lansing-Davis (Haley Pullos) would’ve been another pregnancy option. It could’ve been a good way to force the Brando Corbin (Johnny Wactor) hookup secret out in the open.

Even Brook Lynn Quartermaine (Amanda Setton) could’ve been pregnant after a one-night stand with her former flame, Dustin Phillips (Mark Lawson). It’s easy to imagine Brook Lynn and “Dusty” crossing the line once before deciding to keep it under wraps. That could’ve brought some great material for Lulu Spencer (Emme Rylan).

Elizabeth Webber (Rebecca Herbst) has a full house with all her boys, but that hasn’t stopped “Friz” fans from wishing she’d have a baby girl with Franco Baldwin (Roger Howarth). That would’ve been a nice curveball for Liz and Franco – who can barely afford to pay all the bills and put away college tuition as it is.

If General Hospital had held off on this baby bombshell, they could’ve even given it to Sam McCall (Kelly Monaco). Lots of “JaSam” fans would like to see Sam and Jason Morgan (Steve Burton) add a little one to their family. That’s not possible right now, but it could’ve waited until after all the obstacles were cleared.

Of course, GH could still throw in another pregnancy after new episodes return, but it’s not likely under the circumstances. General Hospital surely won’t be doing another baby switch storyline for a while, so there’s no need for two pregnancies at the same time. Maxie’s baby seems like the one they’ll focus on.

It just seems like a shame since no one was really asking for a “Paxie” baby. It’s unnecessary and robs other female characters of better opportunities for drama. Do you think GH made a baby blunder? Did the writers make the wrong woman pregnant?