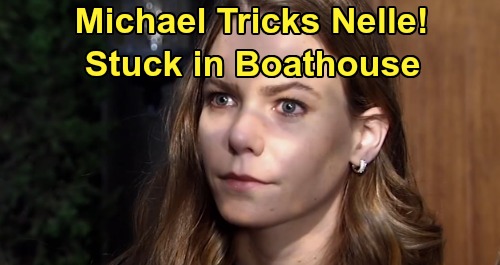 General Hospital (GH) spoilers tease that Nelle Benson Archer (Chloe Lanier) will kick off a new plot, but it’ll come with some roadblocks. GH fans know Nelle’s brimming with confidence now that she’s out of Pentonville. She planted herself at Brad Cooper’s (Parry Shen) apartment to be closer to “Wiley Cooper-Jones” aka Jonah Corinthos (Erik and Theo Olson), but there’s been a change of plans.

Michael Corinthos (Chad Duell) offered to let Nelle move in the Quartermaine mansion, so she quickly got on board. However, this is about more than just living in a fancy ginormous house, which was recently remodeled. Nelle’s real goal is causing drama – and not just for her own amusement this time!

General Hospital spoilers say Nelle will want to drive the whole Quartermaine clan absolutely crazy. She’ll push every button and stir every pot. Nelle will hope that by the time she’s through with them, the Quartermaine family will be begging her to leave. She’ll feel like she can pretty much name her price when it comes to those ELQ shares.

Nelle will assume the crazier she drives them, the more zeroes she’ll get on her check. She’ll count on her sneaky tactics and terrible personality to help her out. Nelle will think she’s in the prime position to do maximum damage – at least in terms of pushing the Q fam to the brink of insanity.

Naturally, Michael’s plans won’t line up with Nelle’s! She’ll think she’s going to move in some lovely guest room, but Michael will plop her in the boathouse. He’d throw Nelle out on the street if he could, but this will be the next best thing.

Nelle will complain, but Michael will insist this is how it’s going to be. He’ll force Nelle to stay out there, but she won’t be happy about it. Nelle’s misery is only going to make her dark determination grow. She could become more dangerous by the second as Michael stands his ground.

Although Nelle won’t be living in the main house, her presence on the property won’t go over well. Ned Quartermaine (Wally Kurth), Olivia Quartermaine (Lisa LoCicero) and Tracy Quartermaine (Jane Elliot) are all going to have a fit. They’ll think Michael’s lost his mind for bringing Nelle so close to the family.