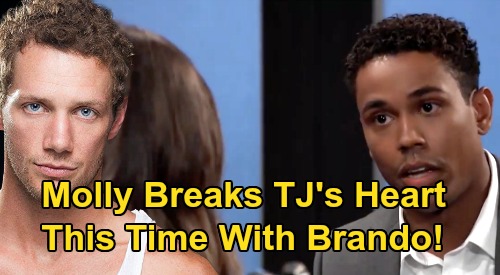 General Hospital (GH) spoilers tease that Molly Lansing-Davis (Haley Pullos) may have just taken steps that will lead to some serious heartbreak down the line. As GH viewers know, Molly has been at her wit’s end over TJ Ashford’s (Tajh Bellow) disappearance. Of course, Molly has no idea that TJ has been kidnapped. Molly simply thinks that TJ is upset with her because she said no to his marriage proposal.

Well, after storming into Jordan Ashford’s (Briana Nicole Henry) place and demanding that Jordan tell her where TJ is, Molly said that she was going to search for TJ herself.

This led Jordan to say some truly horrible things to Molly, in order to stop her from putting herself in danger and going after answers about TJ. Unfortunately, what Jordan said to Molly made it really sound like TJ had dumped her for good.

That led Molly to drive off in a huff and damage her car. In need of a mechanic, Molly stopped by Brando Corbin’s (Johnny Wactor) garage and she and Brando hit it off spectacularly.

We’ll see what else happens between Molly and Brando, but it certainly seemed like they were into each other. Of course, thanks in part to Jordan, Molly is under the impression that she’s newly single.

Well, the good news here is that TJ will make it home and out of captivity with Cyrus Renault’s (Jeff Kober) goons. According to GH spoilers, TJ will be unconscious, bruised, and beaten when Cyrus’ guys dump him off outside of the hospital.

And then, Molly will learn about what TJ has really been through in the past several days. Molly will be horrified to learn that TJ was actually the victim of a terrible crime, and it looks like the two of them will have a nice reunion once TJ comes to.

But GH spoilers also indicate that Molly will keep some secrets from TJ, which probably will have to do with her new friend, Brando.

Of course, it’s possible that by that time, Molly and Brando could be more than just friends. Or, Molly could simply find herself thinking a lot about Brando and finding herself attracted to him while TJ wants to talk about them and their relationship. Either way, it looks like it’s going to cause Molly some serious angst.

It also appears that TJ will have done some thinking about his relationship with Molly while he was being held hostage. According to GH spoilers, TJ will approach Molly with a new idea – entering into a domestic partnership rather than a traditional marriage.

And it looks like Molly will appear to like that idea…but will she really be into it deep down? Or will she still be thinking about Brando?

This situation certainly seems like it has the potential to rip TJ’s heart out all over again. GH viewers know that TJ was really hurt when Molly rejected his marriage proposal, and she could break his heart all over again if she’s fallen for someone else during the time when he was kidnapped and held against his will.

We’ll see what happens here, but this situation seems to have heartbreak written all over it for TJ. Do you think that Molly will find herself wanting Brando instead of TJ? Stay tuned to the ABC soap and keep reading CDL for all your current General Hospital recaps, news, and spoilers.

“Nelle is evil. Promise me you’ll stop her.” #GH pic.twitter.com/g5NrFe8OcD