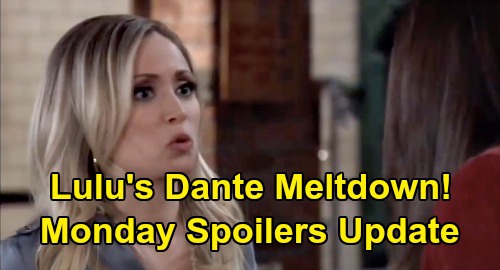 Unfortunately, Brook Lynn will hit Lulu where it hurts again and spark another heated confrontation. After taking a jab about Dante, Brook Lynn will face Lulu’s fury and a physical attack. Later, Dustin Phillips (Mark Lawson) will try to nudge Brook Lynn in the direction of peace.

Since Brook Lynn tends to intentionally rub Lulu the wrong way, Dustin will think Brook Lynn could try being a bit nicer. Brook Lynn will suggest she’s only willing to do that if Lulu does the same! Peace is a two-way street here, so we’ll see if it’s something Lulu and Brook Lynn can ever really accomplish.

Meanwhile, Laura Collins (Genie Francis) will intercept a message that Lulu was supposed to receive. It looks like that’ll lead to Laura’s secret meeting with Valentin Cassadine (James Patrick Stuart), which will go surprisingly well.

Valentin will suggest he’s willing to negotiate with Lulu on the custody arrangement for Charlotte Cassadine (Scarlett Fernandez), so Laura will be pleased.

Sadly, Lulu won’t be in the same frame of mind when she shows up. In fact, Lulu will refuse to sit down and talk to Valentin at all. Of course, there’ll be more going on with Lulu than Valentin realizes – at least initially. Lulu will still be struggling over the anniversary of Dante’s departure, which explains why Brook Lynn’s Dante remark was such a problem.

General Hospital spoilers say Valentin will prove he has a heart in there somewhere. As Valentin watches Lulu break down over Dante, it seems Valentin may have a hint of compassion. That doesn’t mean Valentin will suddenly turn into a big teddy bear, but maybe it’ll lead to a tiny breakthrough for Charlotte’s parents.

Valentin will also score an advantage on Monday, so that could tie in with his ELQ takeover scheme. General Hospital viewers know Valentin’s got his eye on the prize! With any luck, Valentin will give their Quartermaines a huge shock down the road.

Other GH spoilers say Robert Scorpio (Tristan Rogers) will visit Liesl Obrecht (Kathleen Gati) in lockup, which will bring some terrible news. Liesl will get updates on her transfer to The Hague, so she’ll fume about Peter August’s (Wes Ramsey) guilt and how he’s scrambling to cover his tracks.

Despite Obrecht’s anger, Robert will warn her to cool it and not tip anyone off while he works to take Peter down. Liesl will get a promise from Robert, who’ll assure her that he’ll watch out for Maxie Jones (Kirsten Storms) while Liesl’s gone.

Speaking of Maxie, she’ll pop in for an emotional goodbye with Liesl on Monday. It’ll bring some tearful moments, but Liesl won’t give up on returning to her loved ones.

Across town, Peter will let Anna Devane (Finola Hughes) know he intends to stay on the right path. Peter will vow to do everything he can to keep what he has – and what he has is a wonderful life with people who care about him.

That includes Anna, who’ll remain fooled in Monday’s episode. Anna will be touched by Peter’s willingness to learn, grow and change, but GH fans know better! Peter’s keeping some horrible secrets that’ll come back to haunt him eventually.

Finally, Nina Reeves (Cynthia Watros) will have a confession to make. During a chat with Jasper “Jax” Jacks (Ingo Rademacher), Nina will contend that perhaps she’s more like Nelle than she wants to admit.

Although Nina’s a good person now, her past certainly isn’t squeaky clean. Nina will see a little of herself in Nelle, so this is a great setup for Nina to ultimately learn Nelle is her bio daughter.

GH viewers are already in the loop on that Nina-Nelle bomb, but when will it drop on Port Charles? Regardless, the aftermath should bring some fantastic drama! CDL will have other hot General Hospital spoilers, updates and news posts to pass along, so be sure to drop by regularly.