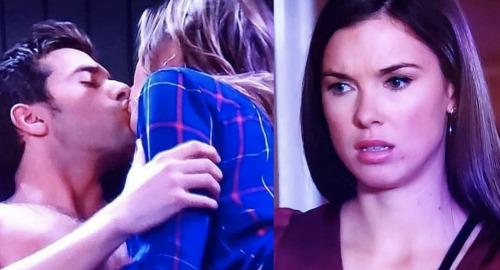 General Hospital (GH) spoilers recap for Monday, April 20, reveal that Lulu Spencer (Emme Rylan), Laura Collins (Genie Francis), and Charlotte Cassadine (Scarlett Fernandez) sat together at the Metro Court after Violet Barnes’ (Jophielle Love) birthday party. Charlotte stepped away, and Lulu admitted that she was relieved that Charlotte wasn’t traumatized by the snake that showed up at the birthday party.

Lulu and Laura talked about Valentin Cassadine (James Patrick Stuart) a bit, and Laura did her best to gently advocate that Lulu try to get along with Valentin for Charlotte’s sake – after all, a lot of Charlotte’s good qualities come from him.

At a nearby table, Ava Jerome (Maura West) asked Nikolas Cassadine (Marcus Coloma) if the snake in her purse was his doing. Nikolas jokingly denied it, and he asked Charlotte, who was standing nearby, if the kids at the party were afraid of the snake. Charlotte said that most of the kids thought it was pretty cool.

Valentin turned to Nikolas and Ava, telling them to stay away from his daughter. Nikolas then stood up and suggested that Valentin back off. Nikolas needled Valentin about throwing Ava off the parapet, and Valentin needled Nikolas about his sham marriage.

Valentin then walked over to Lulu, Laura, and Charlotte, and Lulu suggested that Charlotte tell Valentin about the birthday party.

Valentin then heard about the snake in Ava’s purse, and when Laura and Lulu stepped away, Valentin quizzed Charlotte about how the snake got in Ava’s purse to begin with.

Charlotte deflected, but Valentin said that a charge came up on his credit card for a place called Roger’s Reptile Roundup. Charlotte tried to lie, saying she bought the snake for class, but Valentin called her on it.

Charlotte then admitted that she put the snake in Ava’s bag because she doesn’t like Ava. Charlotte went on to say that Ava married Nikolas and they stole Wyndemere, and now Valentin and Nina Reeves (Cynthia Watros) will never get married.

Valentin said that it wasn’t entirely Ava’s fault, and Charlotte said, “She’s your enemy. Why are you making excuses for her?”

Over at Ava and Nikolas’ table, Lulu approached and asked if Ava was ok after the whole snake thing. Nikolas said that it was all probably just a prank, and Lulu angrily brought up the damage done when Nikolas pretended to be Charlotte’s bodyguard.

Lulu blasted Nikolas for not apologizing to Charlotte, and Ava turned on Lulu, telling her to back off. Nikolas seemed impressed.

Ava then said that they should have a spring fling party at Wyndemere to unveil her portrait – and that they could even invite Elizabeth Baldwin (Rebeca Herbst) and Franco Baldwin (Roger Howarth). Lulu noted that Elizabeth used to be a good influence on Nikolas, then she took off, and Nikolas made fun of Ava’s idea to celebrate her portrait. Ava left in a huff.

Willow and Chase talked about how Nelle Benson Archer (Chloe Lanier) could do real damage to Wiley Quartermaine Corinthos (Erik and Theo Olson). Willow and Chase made plans to meet later at the apartment, and Chase kissed Willow lovingly.

Over at GH, Carly Corinthos (Laura Wright) talked with Sasha Gilmore (Sofia Mattsson) and Michael about Nelle and the custody situation. They rehashed the idea that Michael’s best chances of winning are if he married Willow. Sasha had to go, and Carly and Michael bounced around the idea of the Willow marriage some more.

Later, Willow arrived and bumped into Michael in the hallway. Michael asked if Willow would grab a beer later and talk through her testimony for the custody hearing. Willow noted that she had plans with Chase tonight, but she agreed to break them and meet him later at Charlie’s Pub.

Chase lamented that Nelle would emotionally damage Wiley and that “we’re the only ones in a position to stop this.” Sasha asked if they were “good to do this” and Chase said no, but that he was absolutely committed.

Later, at Willow and Chase’s apartment, Willow walked in and caught Chase and Sasha kissing on the couch. Willow was shocked.

Next, in the Corinthos kitchen, Jason Morgan (Steve Burton) and Sonny Corinthos (Maurice Benard) talked about the Cyrus Renault (Jeff Kober) situation. Jason noted that Cyrus wanted a meeting and probably wanted to negotiate with Sonny. Sonny agreed to meet with Cyrus and told Jason to go set it up.

Jason left as Carly arrived. Carly updated Sonny on Michael’s custody hearing woes, and soon Jason returned saying that the meeting was set up. Jason and Sonny were about to leave when Sonny got a call from Turning Woods about Mike Corbin (Max Gail). Sonny sadly told Carly and Jason that Mike had another fall and that he likely had a seizure.

Robert quickly deduced that Spinelli was looking for dirt on Peter, and Spinelli suggested that they join forces. Robert was skeptical, noting that Spinelli’s work was a bit sloppy.

Spinelli clumsily tried to blackmail Robert into working with him, noting that it wouldn’t look good if people knew the DA was breaking into people’s apartments. Still, Robert thought that Spinelli was too much of a loose cannon, but he finally relented as long as he calls the shots.

Robert and Spinelli then took off, with Robert getting an upsetting call on the way out.

At Anna Devane’s (Finola Hughes) house, Maxie, Peter, and Anna cleaned up after the party. They discussed the snake incident, and it turns out that Hamilton Finn (Michael Easton) scooped up the snake and saved the day.

Through their conversation, it came out that Maxie had threatened to marry Peter when they were talking with Spinelli one day. Anna got very interested in that notion.

Later, when Peter was out of the room, Anna cautioned Maxie about tossing around ideas like marriage too cavalierly with Peter, as those words mean more to Peter than she may realize. Maxie said that she could see how important family was to Peter and that she would be careful with him.

Finally, after Peter and Maxie had gone, Anna’s doorbell rang, and it was a very somber looking Robert. He said he had terrible news – Holly Scorpio (Emma Samms) was dead. Anna looked horrified and hugged Robert.

That was a great episode of GH, and there’s more to come, so stay tuned! Stick with the ABC soap and remember to keep CDL bookmarked for the latest General Hospital updated. We’ve got all the hot spoilers and news!