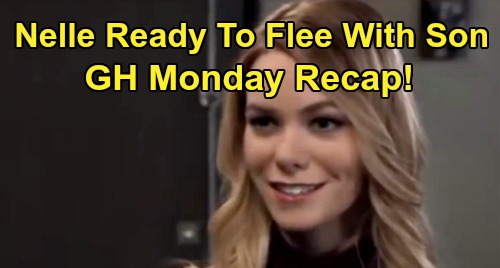 General Hospital (GH) spoilers recap for Monday, February 17, reveal that Nina Reeves (Cynthia Watros) and Jasper “Jax” Jacks (Ingo Rademacher) enjoyed coffee in Jax’s bedroom, and they agreed to see where their relationship goes. They decided to approach it in an honest, above-board, and private manner.

Dev promptly suggested that they send him off to boarding school, but Sonny and Carly promptly refused because he was part of the family now.

At Turning woods, Willow Tait (Katelyn MacMullen) arrived to see Lucas Jones (Ryan Carnes), who said it was time that they talked about Wiley Cooper-Jones’ (Theo and Erik Olson) future.

Willow embarked on a big speech about how tough it would be to say goodbye to Wiley, but that she thought it was for the best, then Lucas said that he wanted to see her to make her a permanent presence in Wiley’s life.

At GH, Brad Cooper (Parry Shen) dropped the bomb on Julian Jerome (William deVry) that he, Lucas, and Wiley were moving to Portland asap and doing exactly as he asked.

Brad seemed pretty sure of himself that being away from Port Charles would be much easier than if they stayed. Ultimately, Julian agreed but warned Brad that he wasn’t untouchable and that he’d be keeping an eye on him even in Portland.

Brook Lynn Quartermaine (Amanda Setton) was working as hostess there, and she sat Dustin while Lulu walked over to Valentin and needled him about not being a Cassadine.

They argued a bit, and Valentin suggested they try to compromise where Charlotte Cassadine (Scarlett Fernandez) is concerned, but Lulu wasn’t having it. Meanwhile, across the room Brook Lynn updated Dustin on her contractual woes.

Soon, Brando walked in to talk to Lulu. They talked about Dev a bit, then Brando asked her to drop her story about his heroics during the warehouse shooting. She promptly refused, explaining that people love a good hero story.

At the Quartermaine mansion, Ned Quartermaine (Wally Kurth) spoke briefly with Olivia Quartermaine (Lisa LoCicero), saying that someone was definitely after ELQ shares, but that the person was good at remaining hidden.

Meanwhile in the living room, Nelle Benson Archer (Chloe Lanier) informed Michael Corinthos (Chad Duell) that she’d be out of the mansion today and that she was going to leave his family in the dirt.

Nelle left, and Ned approached Michael, who seemed unconcerned about Nelle selling her 5% shares. He thought they could just buy back the shares from whoever she sold them to. Ned then wondered what was going on with the investigations into the shootings, and Michael promised to talk to Sonny and find out the latest.

Later, Harrison Chase (Josh Swickard) arrived to see Michael to fish for information about the shootings and the attacks against the Corinthos family. He warned Michael that if he’s sitting on information, he needed to share it.

Michael played dumb, then said that his family didn’t want anyone hurt. Talk then turned to Lucas and Brad’s move to Portland, which Chase thought would be good for Willow.

Back at the Metro Court, Olivia arrived to see Brook Lynn on her phone and ignoring the hostess station. Nina and Jax arrived and sat across the room from Valentin, who looked unamused by the scene. Soon, Valentin was at their table, but Nina refused to speak to him privately.

Valentin let her know that when she was finished running, he’d be waiting for her. She told him he’d be waiting a long time. Nina and Jax then continued their conversation, with Jax making an appointment with the head of HR so they can get ahead of any appearance of impropriety.

Ned then arrived at the Metro Court, noticing that Brook Lynn wasn’t exactly working on her first day. He shared with Olivia that Nelle sold her shares of ELQ and they both wondered who was gunning for the company.

Ned then talked with Brook Lynn, saying that her contract was iron clad and that the lawyers couldn’t find any way out of it. Brook Lynn lamented that she needed to find a solution and left.

Upstairs, in Valentin’s room, Nelle arrived, ready to seal their deal. Valentin promptly gave her a check, as well as new identities and passports for her and Wiley.

She wondered what Valentin was going to do with his shares, and he said that Michael and Sasha Gilmore (Sofia Mattsson) crossed him, and he has payback for Michael in store. Nelle gushed that she’d read about it in the financial papers.

Once outside the door, Nelle looked at Wiley’s passport and said that mommy’s coming, then walked down into the Metro Court restaurant and listened in as Julian spoke with Olivia, saying that Brad, Lucas, and Wiley would be moving to Portland in just a few days.

Next, Brando stopped by the Corinthos house fresh from his meeting with Lulu. He had questions about Dev and wanted to know everything so that he doesn’t blow the whole thing sky high.

They explained the whole thing, and soon Dev came downstairs and formally met Brando. Brando said that he had no idea how to pretend to be Dev’s father and get on with his life at the same time.

Sonny said that they needed Brando to continue to be Dev’s father with no strings attached. Brando told Dev that he deserved a chance, and Dev thanked him. Sonny suggested that Brando go back to Chicago and Dev go off to boarding school, and that everyone would be safe.

Back at Turning Woods, Brad walked in and wondered what Willow’s response was. Lucas then said that they were hoping that Willow would agree to be Wiley’s designated guardian. She was ecstatic and hugged Lucas happily. She promised to give Wiley the very best life possible but hoped that she’d never have to.

Be sure to stay tuned to General Hospital, and we’ll provide updates as more GH news comes in. Don’t forget to check back with CDL often for the latest General Hospital spoilers, recaps, updates, and news.