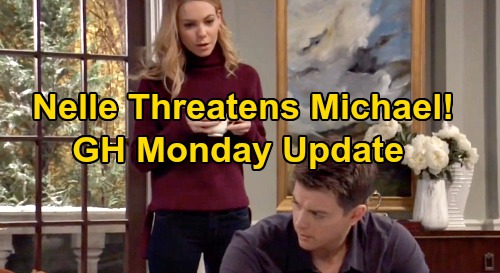 Nelle will contend that she intends to leave Michael and his family in the dirt! She’ll start ranting and perhaps focus on “Wiley” just a bit too much. Michael will hope that Nelle’s going to travel far, far away from Port Charles, but concerns will nag at him.

Nelle’s hung up on this whole “Wiley” thing and Michael won’t understand why – at least not yet! While Michael’s suspicions rev up, Julian Jerome (William deVry) will get some bittersweet news.

Brad Cooper (Parry Shen) will explain that he’s giving Julian what he wanted. He’s leaving PC behind, so he’ll think Julian should be thrilled about that. Julian will indeed be glad to get Brad out of his hair, although he’ll be sorry to see “Wiley” and Lucas Jones (Ryan Carnes) go, too.

Still, Julian knows Lucas could have memory flashes if he’s around all these familiar people. There’s too much in Port Charles that could bring Brad’s confession rushing back. Julian will approve of Brad’s decision to move to Portland and hope it all works out.

As for Lucas, he’ll sweetly reassure Willow Tait (Katelyn MacMullen) about “Wiley’s” future. They may be in another city, but he’ll promise this isn’t the end of her bond with “Wiley.”

Willow will obviously be allowed to have visits with “Wiley” if she wants. Lucas has no intention of hiding anything from “Wiley” and wants Willow to be part of his life.

Although Willow will appreciate Lucas’ thoughtfulness, she’ll accept the situation for what it is. “Wiley” was adopted and lives with his two dads. He goes where they go, so Willow will just want him to be happy and healthy – wherever that may be. She’ll get ready to tell “Wiley” goodbye and send him on his way.

Naturally, none of this really matters since “Wiley” is actually Michael and Nelle’s son. This GH truth bomb will drop thanks to Nelle’s last-minute strategy shift in the week ahead. Needless to say, that Portland move with “Wiley” won’t be happening!

Next, Brando Corbin (Johnny Wactor) will turn to Sonny Corinthos (Maurice Benard) for the scoop on Dev Cerci aka “Dev Corbin” (Ashton Arbab). He’ll want to know the entire story or else he could blow up this secret.

Carly Corinthos (Laura Wright) will smirk as Brando makes his threat. She’ll know he probably wouldn’t follow through, but she’ll be mildly annoyed over his behavior anyway.

General Hospital spoilers say Brando will get updates on everything and promise he’s in. That’s one problem down, but another one will be on Brando’s mind as he seeks out Lulu Spencer (Emme Rylan). He’ll want her to drop the waterfront shootings story, which will lead to a conversation about how she knows Dev.

Lulu will recap the break-in drama and how Sonny took care of it all. Brando will begin to get a greater sense of Sonny’s power and the lengths he’ll go to. Meanwhile, Dev will irritate Sonny and Carly for showing up back at home during school hours. He’ll insist it’s important since it’s about Brando.

Dev will think everything has completely changed now that his “dad” is in the picture. Despite Carly and Sonny’s argument about Brando keeping his mouth shut, Dev will think he needs to leave town. He’ll be terrified about getting deported and landing in danger.

Over with Nina Reeves (Cynthia Watros) and Jasper “Jax” Jacks (Ingo Rademacher), they’ll have some morning coffee and continue to flirt over their hot night. General Hospital delivered some serious steaminess! Jax and Nina are certainly more than friends now – and they’ll have no regrets about that.

Back with Lulu, she’ll encounter Valentin and face a choice. Valentin will note that they can keep fighting or work toward a compromise. He’ll likely suggest that he knows which one Charlotte Cassadine (Scarlett Fernandez) would prefer.

Charlotte hates that her parents clash constantly, so it’d be wise for them to cool it and start finding some common ground.

General Hospital spoilers say the action’s going to get even hotter over the next few episodes. Keep watching and drop by CDL often for some fantastic GH news and updates.