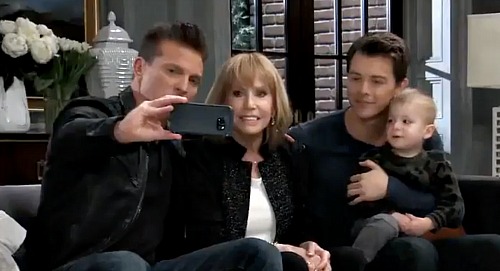 General Hospital (GH) spoilers recap for Monday, February 24, reveal that Nikolas Cassadine (Marcus Coloma) bumped into Ava Jerome (Maura West) at the hospital. After a little bickering with Ava, Nikolas spoke with Elizabeth Baldwin (Rebecca Herbst) about a letter he recently received from Spencer Cassadine (Nicolas Bechtel). Spencer asked his father not to contact him again, and Elizabeth suggested that Nikolas not give up hope.

As Elizabeth and Nikolas spoke, Ava watched them from afar, and Franco Baldwin (Roger Howarth) came up behind Ava and saw her watching his wife with Nikolas. Ava and Franco then went to Franco’s art studio so he could start work on her portrait for Wyndemere. Ava learned through their conversation that Elizabeth and Nikolas once had an affair, and her interest in the whole thing struck Franco as odd.

Meanwhile, at Wllow Tait (Katelyn MacMullen) and Harrison Chase’s (Josh Swickard) apartment, Willow was frazzled and insisted on going to work for the day, to keep her mind on the loss of her baby. Chase tried to talk her down and urged her to take the day off from work, but she insisted that she needed to go.

Willow lamented that it wasn’t right that her boy was taken like he was, but that Nelle Benson Archer (Chloe Lanier) got to be a mother. Chase wanted Willow to take some time and grieve, but Willow persisted, saying that she just had to find her ID badge so she could go to work. Finally, she told Chase to just give her space, and she left, leaving her ID badge behind on the floor.

At the jail, Julian Jerome (William deVry) visited Brad Cooper (Parry Shen). Julian thanked Brad for not telling Lucas Jones (Ryan Carnes) or anyone else about his involvement in the baby switch secret. Brad said he could still blow his cover, and the men argued about whose fault it was that the whole secret came out. In doing so, Julian almost let it slip that he had caused the car accident, but he covered.

Brad relayed how Nelle was saying that he stole Wiley, and Julian said that he could protect Brad but that they needed to work together. Brad balked, but eventually agreed to keep Julian’s involvement in the secret to himself so long as Julian made sure he walked away from all legal charges. But Brad noted that if the high-priced defense attorney that Julian hires fails, then he’d blab Julian’s involvement to the world.

In the Corinthos kitchen, Carly Corinthos (Laura Wright) walked in to find Sonny Corinthos (Maurice Benard) and Jason Morgan (Steve Burton) talking. Carly was dismayed that Lucas didn’t want any visitors today – she just wanted to help him. After Jason left, Sonny asked if Carly was ok, and she started ranting about Nelle and how she’s weaseled her way out of prison before.

Carly opined that it was time that they remove Nelle from their lives for good, but Sonny insisted that they couldn’t interfere. Carly didn’t like the sound of that, noting that Nelle had beat the system before. But Sonny said that Michael Corinthos (Chad Duell) was a grown man and that they needed to let him take care of Nelle himself.

Over at the Quartermaine mansion, Michael hung out with a happy, smiling Wiley. Soon, Monica Quartermaine (Leslie Charleson) arrived and was thrilled to learn that Wiley was Michael’s son. Jason dropped by and Michael inquired about the warehouse fire, with Jason responding that there wasn’t anything for him to worry about.

Michael spoke with Jason at length about fatherhood and whether he’d be a good dad for Wiley, which Jason assured him that he would be. They noted that Wiley has Nelle as a mother, and Michael said he didn’t want her anywhere near him. Jason suggested that Nelle could always be “dealt with,” which seemed to interest Michael for a fleeting moment.

Back at the hospital, Chase arrived looking for Willow. Elizabeth let him know that Willow called in sick today. Meanwhile, in Franco’s art studio, Ava and Franco laughed as Franco tried to sketch, and Nikolas watched them from through the window, then walked in to remind Ava about their dinner later, and Ava let him know that Franco knows about their marriage arrangement. Nikolas left, and Ava told Franco that Nikolas will be the first to break the terms of the post-nup.

At the cemetery, Willow visited her son’s grave. She sadly sat in the snow and told him that she’s here. She told him that he wasn’t supposed to die before her, and that she gave him up to give him a better life, but that he didn’t get any of those things. She hoped that he wasn’t in any pain when he died.

Soon, Elizabeth came up behind Willow and embraced her, saying that Chase told her that she lost her son. Elizabeth said that she was sorry for Willow’s loss, and Willow sadly said that he was all alone when he died. Elizabeth held Willow as she cried.

There’s certainly a lot going on right now on General Hospital, so be sure to stay tuned! Stay with the ABC soap and don’t forget to check in with CDL for the latest General Hospital spoilers, updates, and news.