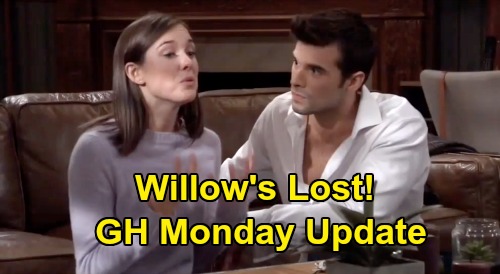 General Hospital (GH) spoilers update for Monday, February 24, teases that Willow Tait (Katelyn MacMullen) will continue to crumble. She’ll be released from GH, but she’ll still feel lost and unsure of what to do. Now that Willow knows her son is dead and Wiley Corinthos (Erik and Theo Olson) belongs to Michael Corinthos (Chad Duell), she’s definitely on unsteady ground.

On Monday, Harrison Chase (Josh Swickard) will be kind and supportive as usual. He’ll know this is difficult, but he’ll want to help Willow in any way he can.

Over with Brad Cooper (Parry Shen), he’ll have an outburst when Julian Jerome (William deVry) shows up. Julian will seek assurance that Brad won’t rat him out, which is only going to irritate this locked-up baby swapper.

Brad will probably marvel at Julian thinking of himself at a time like this. He’ll gripe about losing everything, but Julian will remind Brad that it’s his own fault.

Now that Brad’s life has imploded, what would be the point of blowing things up for Julian as well? It would only mean more suffering for Lucas Jones (Ryan Carnes).

However, Brad will be desperate for leverage that might help him. He’ll decide to hold this secret over Julian’s head and hopefully get his freedom out of it. Brad will warn Julian that he’d better hire a fancy lawyer who can wiggle him out of this.

Brad will want to beat the charges or else he’ll sing like a canary. Julian will pay a steep price if his hired attorney can’t get Brad off the hook.

Other General Hospital spoilers say Jason Morgan (Steve Burton) will talk to Sonny Corinthos (Maurice Benard) about the Cyrus Renault (Jeff Kober) situation. There won’t be any updates, but Jason will insist that he doubled own security on all their properties.

Soon after, Carly Corinthos (Laura Wright) will join the conversation. She’ll talk about Michael enjoying his first day as Wiley’s dad, but Sonny will hate that Michael lost all that time with his son.

Carly will fret about Lucas, who’ll contend that he wants to be alone for a while. Sonny will think that’s understandable, but Carly will still feel a bit helpless. She’ll just wish she could help Lucas deal with this crisis.

After Jason leaves to meet with Michael, Carly will rant about Nelle – the mastermind of this baby swap bombshell. Carly will reflect on all the damage Nelle’s done since she entered their lives. She’ll feel like this Corinthos family torment will never end unless someone steps up and stops Nelle for good.

Back with Jason, he’ll catch up with Michael and see how fatherhood’s treating him. Although Michael will be having a blast in some ways, he’ll be terrified in others.

Michael will fret about not being enough for Wiley, but Jason will likely counter that Michael is more than enough. He’s got a big heart and so much love to give this little boy, so what more could Wiley ask for?

Monica Quartermaine (Leslie Charleson) will be over the moon about Michael’s reunion with Wiley. She’ll be upset for Lucas, but this is still exciting news. Michael will have a chance to raise the son he previously thought was dead. This is a huge deal, so General Hospital spoilers say Monica will be in celebration mode.

Next, Nikolas Cassadine (Marcus Coloma) will seek Elizabeth Baldwin (Rebecca Herbst) out. She’ll look perturbed as Nik asks for help, which is reasonable since Liz is still irritated over missing Hayden Barnes (Rebecca Budig). Nevertheless, Nik will convince Liz to talk and will probably drop some sort of bogus cheating hint.

Based on the latest GH spoilers, it appears Nikolas will want to make it seem like Ava Jerome’s (Maura West) having an affair with Franco Baldwin (Roger Howarth).

Nik can’t just present that kind of bombshell right off the bat, so he might start with cheating suspicions in general. Nikolas might slide a comment in about Ava potentially being unfaithful – and so soon after they wed!

Ava will decide to work a similar angle soon enough. She’ll be taken aback when Franco fills her in on the affair Nik and Liz once had. Ava will form a plan to make it look like they’ve reconnected.

Both Ava and Nikolas’ plots will take some time to play out, but they’ll think the payoff will be worth it. Nik and Ava will be eager to activate the infidelity clause and get out of this marriage without a steep price.

Who will be the winner of this battle: Ava or Nikolas? Will they end up falling for each other instead? As always, you can drop by CDL for tons of great General Hospital spoilers, updates and news.

"You are never going to see Wiley again." #GH pic.twitter.com/eQ6PspvLzb