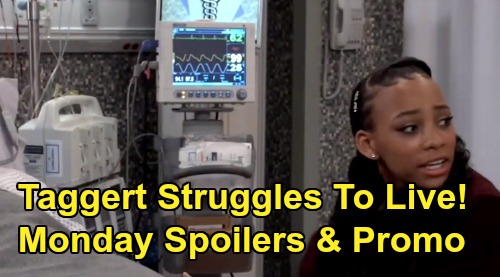 General Hospital (GH) spoilers for Monday, March 2, tease that paramedics will rush Marcus Taggert (Real Andrews) to GH. Cyrus Renault’s (Jeff Kober) goons will be headed there in body bags, but Taggert still has a fighting chance. He pushed Curtis Ashford (Donnell Turner) to take care of his daughter before passing out, but it won’t be long until a top-notch medical team is working to save him.

It looks like Jason will call Sonny Corinthos (Maurice Benard) to fill him in on that connection and explain how this showdown turned out.

General Hospital spoilers say Sonny will talk to Brando Corbin (Johnny Wactor) about this escalating situation. They’ll discuss the topic of protection and what Sonny intends to do next.

Of course, Sonny will be in a tight spot since retaliating could just bring other incidents like this. He’ll be in a real bind, especially since Laura Collins (Genie Francis) already offered a warning.

Speaking of Laura, she’ll be furious when she finds out there’s been another deadly attack. As the mayor, Laura has a duty to keep the people of Port Charles safe. The fact that Cameron Webber (William Lipton) was involved will rile Laura up even more. She’ll point out that Cameron almost died tonight and will decide to take action immediately.

General Hospital spoilers say Laura will pay Cyrus a visit in prison, so GH fans can expect a tense faceoff. Laura will make it clear that she won’t stand for this horrible violence. In fact, she’ll make a bold move in hopes of cutting off Cyrus’ ability to deliver orders. Laura will push for Cyrus’ solitary confinement, but something tells us that won’t be enough to stop a threat this fierce!

Back at GH, Trina Robinson (Sydney Mikayla) will sob by Taggert’s beside and push her dad to pull through. Thankfully, it looks like Taggert will start waking up by the end of Monday’s episode. It’ll be a big relief to Trina, who feared she might lose her father. You can bet Trina will demand answers from Taggert once he’s well enough to give them, but she should mostly just be overjoyed initially.

Over with Jordan, she’ll scold Curtis for not bringing her in the loop on his plans. Jordan will insist that Curtis could’ve been killed, but Curtis may admit that’s why he didn’t tell her. He knew Jordan would have a problem with his involvement and would’ve put herself in the line of fire, too.

Jordan and Curtis will undoubtedly agree that this crisis has gotten out of hand. They need to find a way to end this once and for all, but Cyrus isn’t going to make it easy.

Across town, Willow Tait (Katelyn MacMullen) will put up a fight when it comes to Michael Corinthos’ (Chad Duell) suggestion. Willow feels like if she’s confused, Wiley Corinthos (Erik and Theo Olson) would be as well. She isn’t so sure it’s a good idea for her to be around Wiley right now, but Michael has a completely different view.

Michael pointed out that there’s already been a shift when it comes to the adults in Wiley’s life. Wiley has a certain mindset of who does things for him…who takes him on the swings…who puts him to bed. Michael pointed out that he went from swing set guy to bedtime guy, but Willow can remain a constant. She can continue to play the same caring role she always has – like an aunt figure as Michael suggested.

Sasha Gilmore (Sofia Mattsson) will chime in a little later. When she realizes Willow seems uncertain, Sasha will note that Wiley isn’t the only one who needs her. General Hospital spoilers, updates and news say Sasha will think Michael also needs Willow, which will back up Michael’s argument.

Since Sasha decided to just play this whole kid thing by ear with Michael, she may insist he needs Willow, too. However, the writing’s still on the wall for a Sasha and Michael breakup. They have an emotional discussion coming up down the road, so Michael probably has some heartache ahead of him.