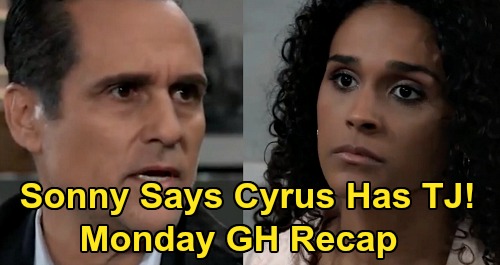 Later, Anna and Finn discussed setting a date for the wedding, and Anna suggested getting Violet involved in the ceremony, since Violet would be such a big part of their lives. Finn loved the idea, but when they told Violet about it, she said, “No thank you. I don’t want us all to get married. I don’t want another Mommy.”

Finn then talked with Violet privately and explained that her Mommy would always be her Mommy, and that there was room in her heart for all of the people she loved.

Anna returned with a birthday party invitation for Hayden Barnes (Rebecca Budig), which touched Violet. Finn explained that Hayden would be at the party in spirit, and Violet asked if her Mommy could also come to the wedding.

Meanwhile, at Kelly’s, Franco Baldwin (Roger Howarth) sat sketching when Britt Westbourne (Kelly Thiebaud) approached him, saying that she owed him an apology since Liesl Obrecht (Kathleen Gati) had tried to kill him.

They chatted for a while about whether Liesl was guilty or not, and Franco ultimately admitted that Liesl would choose herself over him if forced to choose.

Soon, Peter arrived and joined in the conversation about Liesl. Britt noted that Liesl was claiming that Peter framed her, and Peter openly wondered why he’d have done something like that.

Peter claimed that he has no interest in following in Cesar Faison’s (Anders Hove) footsteps. Britt left, and Peter and Franco continued the conversation, with Peter saying that survival is Liesl’s mantra.

Next, in the Corinthos kitchen, Jason Morgan (Steve Burton) pushed aside the bowl of moss in disgust. Sonny Corinthos (Maurice Benard) walked in and told Jason that Cyrus Renault (Jeff Kober) got a shipment through last night. Jason reeled, saying that their guys had been watching carefully, and that the PCPD had been watching the main arteries.

Sonny surmised that the PCPD must have been diverted, and he wondered which cop is most likely to be in Cyrus’ pocket. Jason then remembered that Sam McCall (Kelly Monaco) had mentioned that TJ Ashford (Tajh Bellow) was off the grid and had disappeared.

Jason got a call from a source saying that Jordan Ashford (Briana Nicole Henry) had removed the cops from the route, and Sonny said that wasn’t a coincidence.

At Jordan and Curtis Ashford’s (Donnell Turner) place, Jordan got a fresh picture of TJ, then Curtis walked in the room and invited her to breakfast. Sam came to the door and noted that Jordan seemed like she was expecting someone else.

Curtis stepped out of the room for a moment, and Sam asked about what happened when Jordan followed the coordinates to TJ’s phone. Jordan lied and said that TJ wasn’t there when she arrived.

Jordan then got a text from Harmony Miller (Inga Cadranel) saying she’d come by when Curtis and Sam left. Curtis and Sam left for breakfast together, and Harmony showed up to say that Cyrus was pleased but that TJ wouldn’t be released until Jordan got Cyrus out of prison.

At the Metro Court, Ava Jerome (Maura West) and Nikolas Cassadine (Marcus Coloma) had breakfast together. Through their conversation, Nikolas revealed that he had told Elizabeth Baldwin (Rebecca Herbst) the truth about Hayden’s disappearance. Ava worried that this might sacrifice Nikolas’ friendship with Elizabeth, but Nikolas turned the conversation to Ava and Franco’s friendship.

Meanwhile, across the restaurant, Curtis and Sam talked. Sam wondered if Curtis thought that Jordan was stressed out about TJ, and Curtis said that Jordan certainly wasn’t happy that TJ took off.

Sam mused that she should have gone after TJ herself, prompting Curtis to probe and ultimately learn that Sam had given Jordan the coordinates to TJ’s location. Curtis then took off, headed for home to see Jordan.

Once Curtis arrived home, he immediately confronted Jordan, saying that it clearly wasn’t work that’s stressing her out – it’s TJ. Curtis said that it’s time for Jordan to share what’s really going on, and that she wasn’t alone. Jordan started crying, saying that she didn’t know what to do. Suddenly, there was a knock at the door, and Jordan raced to answer it.

Sonny and Jason barged in, with Curtis bellowing that now isn’t a good time. But Sonny got right to business, looking directly at Jordan and saying, “Cyrus has TJ, doesn’t he?” Jordan stared, conflicted, and Curtis looked horrified.

Britt then walked up in a lab coat, having just been reinstated at GH to replace Kim Nero (Tamara Braun). Felix and Elizabeth were stunned.

Nikolas and Ava got off the elevator, and Britt waked over to Nikolas and promptly slapped him. “That’s for Spencer,” Britt said. She proceeded to blast Nikolas for hurting Spencer just to get revenge on Valentin Cassadine (James Patrick Stuart).

Britt went on, until Elizabeth walked over and told her that was enough. Britt and Elizabeth had words, as Ava looked on, amused.

Afterwards, Nikolas asked Elizabeth if she defended him because she’d forgiven him, or if she just hated Britt more. Elizabeth said, “Whatever it was, it was against my better judgment.” Ava watched and smiled.

There’s definitely a lot going on right now on General Hospital, so stay tuned! We’ll give you updates as more GH news comes in. And don’t forget that CDL is your source for the latest General Hospital news and spoilers.