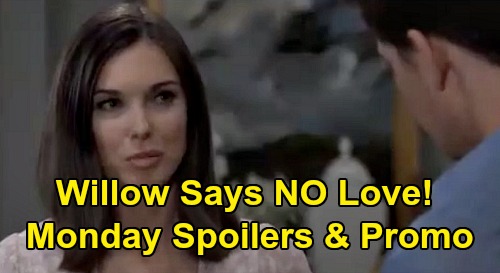 General Hospital (GH) spoilers for Monday, May 11, tease that Nelle Benson Archer (Chloe Lanier) will show up to see Julian Jerome (William deVry). At Charlie’s Pub, Nelle will insist she’s come to make a very generous offer from the heart. Julian probably won’t be sure Nelle even has one, but he won’t be interested in her pitch either way.

Nevertheless, Nelle will insist on sharing her proposition, which will involve Julian speaking on her behalf at the custody hearing. It’s not clear what Julian could possibly gain from doing that, but Nelle will have some way to spin this.

In the end though, Julian will urge Nelle to scram. He’ll declare that Nelle Benson is done there, but Nelle will hang around the bar anyway.

At the PCPD, Brook Lynn Quartermaine (Amanda Setton) will remain in lockup. It looks like Ned Quartermaine (Wally Kurth) will refuse to bail Brook Lynn out since this is becoming such a terrible pattern for her.

As for Harrison Chase (Josh Swickard), he’ll enjoy watching Brook Lynn squirm. Chase will suggest that if Brook Lynn’s father won’t help her, he wants to see who will.

It turns out it’ll be Julian who comes to Brook Lynn’s rescue, so this should help them put the blackmail drama to rest. Brook Lynn will be appreciative and will assure Julian that his secrets are safe with her.

The problem is Brook Lynn will say things that don’t need to be said in public – not when someone like Nelle could be lurking and listening.

That’s exactly what’ll happen as Nelle overhears info that changes the game. It won’t be long until Nelle returns to Julian – and she won’t have to ask nicely this time! Nelle will know all about Julian’s part in the baby switch cover-up. She may hear about Julian’s murder attempt on Brad Cooper (Parry Shen), too.

Whatever the case, Nelle will drop a new blackmail bomb on Julian, so he’ll have to obey orders or risk Lucas Jones (Ryan Carnes) hating him forever. Next, Hamilton Finn (Michael Easton) will call someone and ask if they’d like to grab a beer. It looks like it’ll be Chase that Finn hits The Floating Rib with a little later.

Now that Finn knows Chase didn’t come clean, he may once again push his brother to make things right. Finn might even offer to help since we know he’ll indeed make an offer on Monday. However, GH spoilers say Chase will reject that offer and stick to the plan for now.

Michael Corinthos (Chad Duell) and Willow Tait (Katelyn MacMullen) couldn’t live with themselves if they didn’t do everything in their power to keep Wiley Quartermaine-Corinthos (Erik and Theo Olson) away from Nelle.

Chase will feel like this is the only way to push Willow and Michael into marriage, but can Chase can handle Willow being Mrs. Corinthos?

At the Quartermaine mansion, Michael and Willow will have a serious talk about tying the knot. Willow will ask if Michael can marry a woman who will probably never be in love with him. Girl, please. Who does Willow think she’s kidding? Willow will inevitably fall hard for her vanilla husband as they start building a life together with Wiley.

Michael and Willow will say their vows later in the week, so don’t miss this “Millow” wedding. CDL will have other terrific General Hospital spoilers, updates and news to pass along, so don’t forget to stop by regularly.