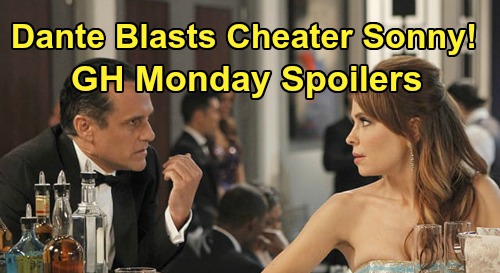 General Hospital (GH) spoilers for Monday, May 25, tease that the ABC soap will begin airing Nurses Ball classics, so they’ll start things off by going back to 2014. GH fans won’t want to miss all the memorable moments ahead! General Hospital spoilers say this is what you can expect in Friday’s encore presentation.

For starters, Brad Cooper (Parry Shen) finds Britt Westbourne (Kelly Thiebaud) sulking with ice cream in her robe. He doesn’t think Britt should be alone, so he joins her in watching all the red-carpet arrivals.

After reminding Maxie that he’s a detective trained to pick up on clues, Maxie argues that she was simply thinking about all the wasted trees and money spend on these invitations.

Nathan assumes Maxie’s just saying what Levi Dunkleman (Zachary Garred) said. Although Maxie admits she’s always enjoyed attending this event, she unconvincingly contends that she’s content to have an evening of romance at home with Levi.

Over with Nikolas Cassadine (Tyler Christopher), he wants to hang out with Spencer Cassadine (Nicolas Bechtel) for the evening. Spencer thinks they should invite Britt, but Nikolas shuts down the idea. When Spencer wonders if Nikolas wants to be with Elizabeth Webber (Rebecca Herbst), Nik gets a bit flustered.

Spencer thinks Nikolas has been looking at Liz like he wants to marry her – and Nikolas indeed gives Liz some heart eyes when she appears in a lovely gown. In private, Elizabeth points out that Nikolas could change his mind about attending the Nurses Ball.

Nikolas isn’t on board with that idea since the last one was so disastrous, so he tells Liz he’s just going to stay home with Spencer.

In Lucy Coe’s (Lynn Herring) dressing room, she gets praise from Felicia Scorpio (Kristina Wagner) for breaking things off with Scott Baldwin (Kin Shriner). Lucy confesses that it was tough since she still misses Scott, but she felt it was the right thing to do since she wants to preserve her relationship with Kevin Collins (Jon Lindstrom).

Lucy’s just glad Kevin didn’t find out, but he arrives just in time to catch a bit of the conversation. Felicia helps Lucy cover by talking about a surprise performance at the Nurses Ball.

This news excites Kevin, but Lucy’s left a bit panicked. Once Lucy’s alone with Felicia, she rants at her for putting her on the spot. Lucy doesn’t have a performance planned, but Felicia thinks Lucy will come up with something.

Meanwhile, Sonny Corinthos (Maurice Benard) gets confirmation that Ava Jerome (Maura West) has been taken to his private island. He doesn’t plan on going to the Nurses Ball since Olivia Falconeri (Lisa LoCicero) found out he hooked up with Ava. On the red carpet, Olivia spars with Carly Corinthos (Laura Wright) on the air and dodges tricky questions from reporters.

Sam McCall (Kelly Monaco) trips as she makes her way down the red carpet and is helped to her feet by Silas Clay (Michael Easton). Silas offers reassurance before Sam addresses her fall during an interview and shares who designed her dress. Back with Olivia, she grabs Ned as a quick red-carpet replacement for Sonny.

As Sonny appears, Olivia toys with the idea of publicly revealing why she’s got Ned on her arm instead of Sonny. Dante Falconeri (Dominic Zamprogna) and Lulu Spencer (Emme Rylan) usher Olivia away from the reporter before she can blab.

Next, Lucas Jones (Ryan Carnes) and Felix DuBois (Marc Anthony Samuel) acknowledge that they don’t have dates and opt to walk the red carpet together. Nathan walks with Epiphany Johnson (Sonya Eddy) and gets praise from a reporter as the best-looking man at the Nurses Ball.

After Lucy spots Scott with Bobbie Spencer (Jacklyn Zeman), she looks uneasy and a bit jealous. Kevin questions Lucy a little later, but she downplays it and pretends everything’s just fine.

Back with Britt and Brad, they thoroughly enjoy Sam’s unfortunate red-carpet fall. They even replay it for laughs, but the sight of Rocco Falconeri and Lucas with Felix isn’t as fun.

Britt is, however, pleased to see Liz with Ric Lansing (Rick Hearst) by her side instead of Nikolas. As for Maxie, she debates with Levi at home about the event. Levi objects to all the money spent on gowns, but Maxie watches some of the red-carpet festivities. She’s forced to distract Levi when the reporter brings up how handsome Nathan is.

Levi eventually decides he’ll go to the Nurses Ball with Maxie while Dante confronts Sonny about cheating on Olivia. Dante’s fury erupts over Sonny hurting Olivia over something so meaningless. Despite Dante’s insistence on knowing who the other woman was, Sonny doesn’t offer the info.

After the Nurses Ball begins with the typical welcome song, Liesl Obrecht (Kathleen Gati) derails it with her own cabaret number. Although Liesl’s pleased with herself, the audience is stunned – right along with Britt and Brad across town. Brad declares that it’s one nutty hospital!