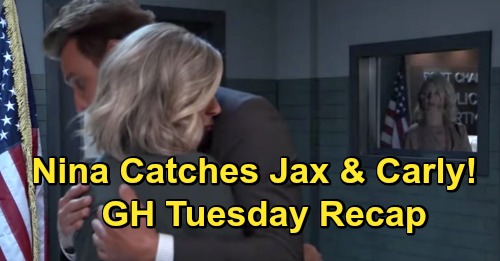 Carly reassured Diane that she wasn’t withholding anything from her, and then Jordan Ashford (Briana Nicole Henry) arrived to say that Detective Oliver DeLeon would be in shortly.

Meanwhile, over at Charlie’s Pub, Jasper “Jax” Jacks (Ingo Rademacher) told Nina Reeves (Cynthia Watros) that Sam McCall (Kelly Monaco) would have to either sell Drew Cain’s (Billy Miller) half of Aurora or get a competent CEO.

Nina got a phone call about Nelle Benson Jerome’s (Chloe Lanier) burial, and then Jax got a call from Jordan wanting him to come to the PCPD for some more questions about Nelle’s death.

After Jax took off, Valentin Cassadine (James Patrick Stuart) walked up and Nina shared that she was looking for Phyllis Caufield. Valentin wanted to help Nina find Phyllis, but Nina said that she couldn’t have Valentin anywhere near this, and that she needed to do this on her own. “Or with Jax?” Valentin asked.

Valentin blustered on, saying that Carly would always come first to Jax, prompting Nina to get irked and walk out, telling Valentin to stay out of her life.

Outside the pub, Sasha Gilmore (Sofia Mattsson) encountered Willow Corinthos (Katelyn MacMullen), who invited Sasha inside for a drink. Sasha and Willow talked about how they used to be friends and how they missed it.

Sasha shared that she had a terrible turn of events at Deception, and Willow offered advice. After some talk about Harrison Chase (Josh Swickard) and Michael Corinthos (Chad Duell), things got awkward and Sasha left.

Back at the PCPD, Detective DeLeon questioned Carly with Diane present. The detective asked point blank if Carly pushed Nelle off the cliff, since the autopsy revealed that Nelle died from a traumatic fall.

During the questioning, Carly stated that she was relieved that Nelle was dead, much to Diane’s chagrin. Ultimately, Carly said that she stood by her sworn statement from the night of Nelle’s death.

Later, Diane took off for a drink, noting that Carly was a difficult client and that she shouldn’t have volunteered information. Jax arrived at the station and Jordan asked a few follow up questions, then Jax went to see Carly, who was now alone in the interrogation room.

Carly shared that the detective thinks that she pushed Nelle, and Carly said that Jax was right for urging her to keep quiet about what really happened. Carly thanked Jax, and they hugged, just as Nina walked into the station and saw them embracing.

At the gym, Michael pummeled a punching bag as he thought back to his conversation with Willow about where their relationship stands. Chase arrived and inexplicably offered to be Michael’s sparring partner.

Michael was irked, but he agreed, and he ended up punching Chase as they talked about Chase and Sasha’s affair. Michael took off, leaving Chase frustrated.

Later, Chase was punching the bag when Sasha came in and said that she was just with Willow at Charlie’s Pub. Chase asked how Willow was doing. “Moving on, whether she knows it or not,” Sasha said. “So is Michael,” Chase said, punching away at the bag.

At Alexis Davis’ (Nancy Lee Grahn) house, Sam showed up to confront her mother about her drinking. Alexis griped that she didn’t answer to Sam, and just then a delivery person arrived at the door with another bottle of vodka for Alexis. Alexis fought back hard against Sam, needling her about Jason Morgan (Steve Burton) and doing everything in her power to drive Sam away.

Alexis asked Sam to have a drink with her, but Sam wouldn’t enable her mother. Alexis pointed out that Sam’s relationship with Jason was an unhealthy addiction, which irritated Sam. Alexis continued to push Sam in an attempt to get Sam to leave, even saying that she liked the bottle a lot more than Sam right now. Ultimately, Sam left but said she was coming back.

Ned had just told Monica about cheating with Alexis. Olivia dragged Brook Lynn into the living room and said that Brook Lynn and Ned needed to clear the air.

Monica and Olivia stepped out for a moment, and Ned and Brook Lynn argued. Brook Lynn said that she heard Ned say that he slept with Alexis, and Ned insisted it was a mistake.

Brook Lynn noted that Ned couldn’t forgive her for selling her ELQ shared, yet she was supposed to accept that Ned made a mistake when he cheated on his wife. Ned then blamed Brook Lynn for the whole thing since she deleted Olivia’s phone message.

That upset Brook Lynn, and she left enraged. Olivia and Monica returned, and Olivia shared that Dante Falconeri (Dominick Zamprogna) was back. Meanwhile, in the foyer, Michael returned home to find Willow, who said that she had reached a decision about their marriage. Michael said that he had, too.

Finally, back at Charlie’s pub, Valentin sat at the bar drinking vodka straight. Brook Lynn sat down next to him, and Valentin noted that he was drinking solely to get drunk. Brook Lynn said she’d join him.

There’s certainly a lot going on right now on General Hospital, so stay tuned! We’ll give you updates as GH news comes in. Remember to stick with CDL for all the hot General Hospital spoilers and news. We’ve got you covered!