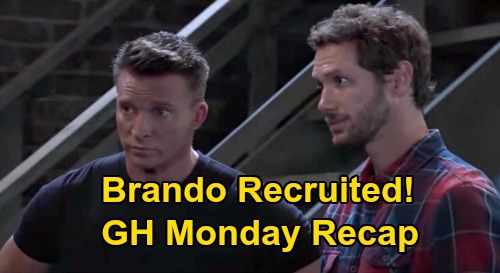 Portia said that Marcus Taggert (Réal Andrews) wouldn’t want Trina to miss out on things because of him, and Trina indicated that she was stressed out about something else. Portia guessed that it had to do with Cameron Webber (William Lipton).

Meanwhile, in another area of the Haunted Star, Josslyn Jacks (Eden McCoy) and Cameron kissed. Dev Corbin (Ashton Arbab) interrupted, and Josslyn scurried off to go find Trina, who Dev said was having a hard time.

Josslyn found Trina with Portia, and the girls headed off to a state room for some alone time. After sitting for a while in the quiet room, Trina started feeling better, and she thanked Josslyn for keeping her company.

Trina and Josslyn hugged, but Josslyn still appeared to feel weird about the kiss with Cameron earlier and she didn’t disclose the kiss to Trina.

Back with Dev and Cameron, Cameron decided that he should take a step back and get a handle on his feelings before he does anything else. Trina and Josslyn showed up, and the teens decided to finish out the rest of the dance together.

Elsewhere on the Haunted Star, Portia and Elizabeth Baldwin (Rebecca Herbst) talked about how their kids were developing feelings for each other, noting that they had a little teenage angst on their hands.

Both Portia and Elizabeth vowed to stick by their kids and to see where Cameron’s and Trina’s hearts took them.

Stella thought that TJ was dealing with a lot of trauma and that he was avoiding dealing with it. Jordan agreed, and she left to go find TJ and talk with him about it.

Stella and Curtis then talked about Taggert’s death, and the topic of Trina and Portia came up. Stella learned that Curtis and Portia went way back, and she suggested that Curtis tread carefully with Portia going forward.

At the bar inside, Molly and TJ were talking about Cyrus when Brando Corbin (Johnny Wactor) came in. TJ urged Brando to get involved in their movement against Cyrus, but Brando balked, saying that he didn’t have time to be involved, and that TJ should focus on happier things, like his commitment ceremony to Molly.

After Brando took off, TJ wondered what the deal was with Brando. Jordan then approached and wanted details about Molly and TJ’s protest against Cyrus. Jordan urged TJ not to throw himself into this fight to avoid dealing with his trauma, and she said that TJ should be focusing on the commitment ceremony.

Jordan took off, and Molly suggested that TJ could talk with someone about what happened, but TJ balked, saying that he didn’t want to talk about his feelings. Rather, he thought he could channel his anger into more productive things, and he thought that focusing on their commitment ceremony was a great idea.

On the pier, Jason Morgan (Steve Burton) pitched an idea to Sonny Corinthos (Maurice Benard) about Cyrus. Jason said that Cyrus’ weakness was arrogance, and that he was gathering allies to prepare for open hostilities later.

Suddenly, Brando appeared, and Jason continued, saying that Cyrus had already reached out to Brando.

“We send Brando to work for Cyrus, but really he’s working for you,” Jason explained. Sonny thought it was a solid plan, but he worried that Cyrus might essentially take Brando as a hostage.

Brando said that it was a risk he was willing to take, and Jason noted that it was Sonny’s call from here. Brando took off, and Sonny told Jason to keep an eye on Brando, effectively green lighting the idea.

Ryan said that Ava would have to wait until their visit for specifics.

Ava balked, saying she wouldn’t visit, but Ryan assured her that she would. “We have something to discuss – something life-changing,” Ryan said. Ava said that she didn’t believe Ryan, but he told her he hated to wait, and he hung up. Both Julian Jerome (William deVry) and Nicholas urged Ava not to play Ryan’s game.

After Julian took off, Nikolas again told Ava not to engage with Ryan, and that led to some bickering between Nikolas and Ava. Ava accused Nikolas of being like Ryan, then she apologized.

Nikolas really sounded like he cared as he said that he didn’t want to see her get hurt by Ryan again. Ava seemed touched.

Nikolas then got a text and had to go, and Ava wrestled with whether or not to go to Pentonville. Later, Ava showed up to see Ryan at the prison. “Ava, you’re a sight for sore eyes,” Ryan said happily.

There’s definitely a lot going on right now on General Hospital, so stay tuned! We’ll give you updates as more GH news comes in. Stick with the ABC soap and be sure to keep CDL at the ready for all the latest General Hospital spoilers, news, and daily episode recaps. We’ve got you covered!