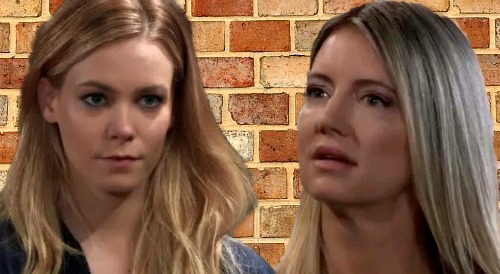 General Hospital (GH) spoilers tease that Nelle Benson Archer (Chloe Lanier) may put another plot in motion soon. After manipulating her way into a job at Crimson, Nelle will be in the prime position to join another storyline. There must be a reason GH writers are putting Nelle back in Nina Reeves’ (Cynthia Watros) orbit.

We should also remember that Nina still doesn’t know who her biological daughter is. Nina does, however, have a half-heart pendant necklace that she gazes at frequently while she’s at work. It’s reasonable to think Nelle may get mixed up in this story somehow. There are certainly several different ways General Hospital could take this hot plot.

Let’s start with the obvious: Nelle could be Nina’s bio daughter in a shocking twist. That’d be a fun way to go, but it’d also mean ignoring all the clues GH has given about Willow Tait (Katelyn MacMullen) being Nina’s true daughter. Perhaps we should explore options that would be more in line with Nelle’s twisted ways.

Since Nelle will be at Crimson, the presents the opportunity for her to overhear Nina talking about this necklace and her long-lost kid. Could Nelle swipe that necklace and have a replica made?

Can’t you just imagine crazy Nelle doing that sort of thing? It’s easy to envision Nelle waltzing in with her fake half-heart pendant necklace on and suggesting she’s had it all her life.

That’s especially true if Nelle somehow puts the pieces together and determines that Willow could be Nina’s real daughter. Nelle will want to keep Nina on her side for the sake of this new job and perhaps for Valentin Cassadine’s (James Patrick Stuart) continued support. The last thing Nina needs is Valentin feeling guilty and shifting his allegiance to Willow because of Nina.

Plus, Nelle could gain Nina’s favor as her fake daughter. Nelle might think Nina would be a valuable tool in her custody fight. Nina’s a successful businesswoman with no mob connections and has served as a loving mother figure to Charlotte Cassadine (Scarlett Fernandez).

Since Nelle was Charlotte’s nanny once upon a time, Nina can attest to the fact that Nelle was great with her.

Almost anyone that gets up in court to vouch for Michael Corinthos (Chad Duell) is going to be involved in Sonny Corinthos’ (Maurice Benard) dangerous world – a world that Nelle will argue her son shouldn’t be part of. If Nelle sells this phony daughter connection, she might convince Nina of that, too.

All of this would set up another big reveal where Nina’s once again duped over her long-lost child’s identity. Could you see Nelle cooking up a scheme to make herself Nina’s fake daughter? Would you be on board with a twist like that?