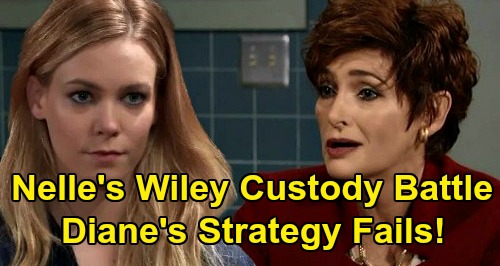 Carly Corinthos (Laura Wright) warned Nelle that if the legal system didn’t take care of this, she’d do it herself. She even suggested that Nelle’s first steps into the sunshine could be her last! However, Carly’s tirade went in one ear and out the other. Nelle isn’t afraid of her, which is understandable considering how many times Nelle’s succeeded in making Carly and her family miserable.

Carly insisted Nelle would ever get near Wiley Corinthos (Erik and Theo Olson) again, but Nelle will obviously have other plans. She’ll want to get her vision board progress back on track. There’s no way Nelle’s going to sit back and let the Corinthos clan have control of her son. That was the whole point of putting this swap in motion to begin with.

During the week of March 9-13, Diane Miller (Carolyn Hennesy) will come up with a plan. It’ll undoubtedly be a cutthroat one since Diane’s such a shark! She always fights hard for Sonny Corinthos (Chad Duell), Jason Morgan (Steve Burton) and their loved ones.

General Hospital spoilers say Diane will hope this new strategy of hers will help Michael. That probably means trying to block Nelle from scoring any custody rights or even visitation. The less Wiley sees of Nelle, the better off he’ll be. Diane may not know if her tactic will work, but she’ll go into it with confidence as usual.

Sasha Gilmore (Sofia Mattsson) will have her doubts around the time this is all going down. She may fear Michael won’t be able to stop Nelle, who’s proven she’s a force to be reckoned with. If that’s how Sasha feels, she’ll probably have it right!

Nelle intends to be with her son – no matter what it takes. If Nelle can do that legally, then that’s great. If it takes another kidnapping attempt, Nelle would probably be fine with that, too. She’ll just be desperate to get her hands on Wiley.

General Hospital viewers know a desperate Nelle is a dangerous Nelle, so this is bound to bring bad news! We’ll give you updates as other GH details emerge. Don’t forget to pop in regularly for General Hospital spoilers, updates, shockers and shakeups.