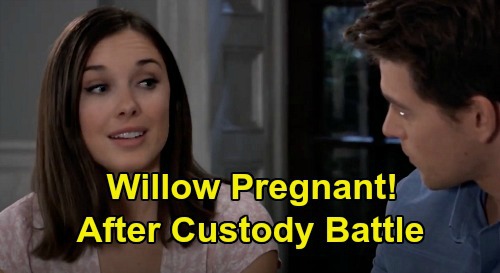 General Hospital (GH) spoilers tease that Nelle Benson Archer (Chloe Lanier) could see a new strategy opportunity. Michael Corinthos (Chad Duell) and Willow Tait’s (Katelyn MacMullen) marriage could present a nice distraction if Nelle plays her cards right. Before we get to that, let’s consider what’s ahead in the courtroom.

No one knows for sure what the outcome of this custody battle will be, but joint custody makes a lot of sense. It’d be frustrating for Nelle, who wants Wiley Quartermaine-Corinthos (Erik and Theo Olson) all to herself. It’d be even more frustrating for Michael and Willow, who want Nelle out of Wiley’s life.

In other words, everybody wins and everybody loses! By forcing Michael and Nelle to share custody of Wiley, the judge would keep the conflict going strong. Nelle and Michael would have plenty of reasons to clash over how Wiley’s raised.

Naturally, Nelle will find out she’s Nina Reeves’ (Cynthia Watros) biological daughter somewhere along the way. Since Nina wants to believe Nelle’s capable of being a good mom, maybe she can help Nelle take on the Corinthos crew – and Willow, who’s officially becoming part of he fam.

It’s easy to imagine Nelle suggesting that if Michael and Willow genuinely fell in love, that’d distract her ex. If Willow and Michael had another child to dote on, that’d be even better in Nelle’s eyes.

Nelle might feel like if Willow ultimately falls for Michael and gets pregnant again, they’ll stop obsessing over Wiley and just accept that she’s going to be in the kid’s life.

Nina was practically Willow’s enemy once upon a time, but they’ve made peace now. Since they’re on good terms and Willow’s still been in Nina’s orbit, maybe Nina could help push Willow in the direction of love. Could Nina do some matchmaking on Nelle’s behalf?

Nina could easily praise Michael’s positive attributes in casual conversations. As a mom who knows what it’s like to lose a child, Nina could also nudge Willow toward having another baby. Willow might begin to want child of her own that doesn’t have to be shared with another mother – especially Nelle!

Nina tried to play Cupid for Michael and Sasha Gilmore (Sofia Mattsson), so she’s used to meddling in matters of the heart. Since Nelle doesn’t want Michael back, this would just be a different kind of matchmaking.

Nina would be trying to help push Michael and Willow together for Nelle’s sake. It might put their attention on their impending bundle of joy and relieve the tension with Nelle somewhat.

Of course, Michael and Willow are never going to stop wanting what’s best for Wiley, but love and a pregnancy distraction could work in Nelle’s favor. The less time Willow and Michael have to fight with Nelle, the more time Nelle can spend bonding with Wiley in peace – and Nina would likely root for that.

Would Nelle benefit from true “Millow” love and another baby for Willow? Would it distract the newlyweds and take of some of the pressure off Nelle? General Hospital spoilers say Nina could get tangled in Nelle’s web she isn’t careful, so we’ll see how it all plays out. As other GH news comes in, we’ll pass along updates.