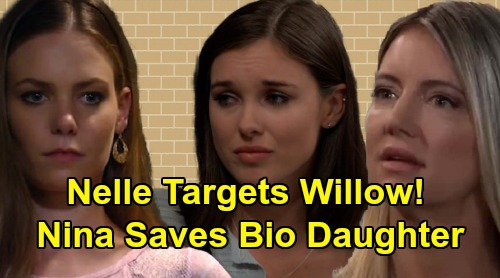 General Hospital (GH) spoilers tease that Nina Reeves (Cynthia Watros) will find herself appalled during the week of January 27-31. Nelle will deal with some misery at the same time, so could these GH spoilers be connected? It’s be nice to see General Hospital writers tie in Nelle and Nina’s history.

After Nelle’s first round of drama blew up, Nina showed her kindness. Perhaps part of that was because of Nina’s desire to have a daughter of her own. She seemed eager to nurture Nelle and take her under her wing.

Nelle served as Charlotte Cassadine’s (Scarlett Fernandez) nanny before ultimately getting a job at Crimson, so Nina was a big believer in second chances.

GH fans will also recall how Nina visited Nelle after she was mugged on the pier. Nina got choked up by Nelle’s bedside in the hospital. Since Nelle had no family to visit her, Nina assured her that she’d be by her side. She did everything she could to make Nelle feel loved and supported.

Of course, General Hospital eventually ditched the redemptive route with Nelle and turned her into a full-blown psycho. Nina decided she was done with Nelle, but maybe it’s time to reignite some old animosity. There’s be a couple of good reasons to do so.

For starters, General Hospital spoilers say Nina’s bio daughter story is set to rev up back. GH fans recently saw Nina gazing at the half-heart pendant, which is a surefire sign that we’re on the verge of learning who her real daughter is.

Considering all the history we spelled out, Nelle could easily be the answer to that question. She’d be the most dramatic option since Nina hates her now.

However, it seems more likely that Willow Tait (Katelyn MacMullen) is Nina’s real daughter. GH spent a great deal of airtime establishing their feud. After Nina looked at the necklace recently, the next person we saw onscreen was Willow. That seemed like another clue that GH was headed in the Nina-Willow mother-daughter direction.

If that’s still the way they intend to take things, Nelle could still factor in. After all, Nelle delivered a vicious threat recently. She told Brad Cooper (Parry Shen) to get rid of Willow or she’d do it for him. Nelle left Brad fearful about Nelle taking Willow’s life – and it’s certainly something Nelle’s capable of.

If Nina’s appalled over Nelle’s release and recent behavior, she could contribute to Nelle’s looming misery. It’d be interesting to bring Nina into this drama if she’s Willow’s true mom. Perhaps Nina could end up saving Willow’s life. Wouldn’t it be something if Nina unknowingly rescued her own daughter?