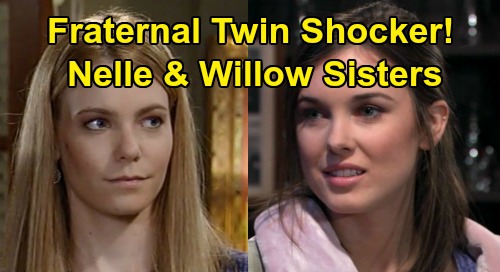 General Hospital (GH) spoilers tease that there’s an important case left to crack on the ABC soap. GH still hasn’t confirmed the identity of Nina Reeves’ (Cynthia Watros) biological daughter, so fans are eager to see some sort of resolution. This storyline’s been going on for quite a while now, but General Hospital viewers will finally get answers this spring.

Of course, GH writers have pretty much narrowed it down to two options at this point: Willow Tait (Katelyn MacMullen) and Nelle Benson Archer (Chloe Lanier). There have been clues that point to both of them, so fans are still guessing about which one will be confirmed as the real deal.

So who’s it going to be: Nelle or Willow? Is there a chance it could be both?! Now just hear us out for a minute. If General Hospital wanted to deliver a whopper of a surprise, they could make Willow and Nelle fraternal twin sisters.

Before anyone starts ranting that it didn’t happen that way, keep in mind that rewrites happen all the time. There have been tons of twins that were later invented over the years. After all, it would explain why GH seems to be offering hints about both possibilities.

Nelle is now firmly entrenched in Nina’s world at Crimson – leaving her in the ideal spot to be revealed as Nina’s biological child.

See how General Hospital’s playing both sides here? Even that half-heart pendant necklace could be a twin clue. What if Nina wasn’t the one who was supposed to end up with that half? Think about it.

The whole “two halves of a heart” necklace thing makes more sense as a twin trope. One twin’s supposed to find one half and the other’s supposed to come along as the sister to complete it. It’s more logical than a mom and daughter set.

That pendant only ended up with Nina thanks to Madeline Reeves (Donna Mills). What if Madeline originally meant for each twin to get a half, but her plans didn’t pan out for whatever reason?

As for why Madeline never divulged this twin revelation, well…that’s what happens when there’s a rewrite. There are new secrets that ultimately come to light.

It’d be a real shocker if Nelle AND Willow are Nina’s biological daughters. There’s no guarantee that’s how it’ll play out, but it’s a fun theory to speculate on. We’ll give you updates as other GH news emerges on this possibility.

Could you buy Nelle and Willow as fraternal twins? It’d be the ultimate good sister and bad sister combo. Their rivalry would rev up like never before! Stick with CDL for other hot General Hospital spoilers, news and updates.