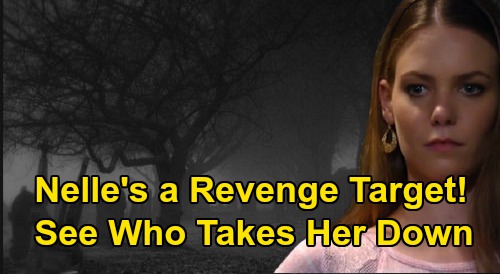 General Hospital (GH) spoilers tease that Nelle Benson Archer (Chloe Lanier) may regret her upcoming strategy. GH fans know Brad Cooper (Parry Shen) just spilled the whole baby swap story in the Corinthos home. He insisted it was all Nelle’s idea, but she’ll offer a very different version of events after she’s captured and hauled down to the police station.

Brad will be behind bars as well when Nelle turns this around on him. She’ll assure the cops that Brad’s the only one who should be locked up. After Nelle argues that Brad stole her baby while she was unconscious, he’ll be flabbergasted. It’s not the truth, but it’s not like Brad’s some pillar of honesty either. Nelle can easily dispute the claims of a lying baby swapper.

Based on General Hospital spoilers, updates and news for the next couple weeks, it looks like Nelle’s actually going to get by with this bogus excuse. Nelle will likely score her freedom since GH writers let her come up with this alternative strategy. However, Nelle might want to rethink this! Is it really safe for Nelle to be roaming around free in Port Charles?

Nelle was already a town pariah, but now the hatred for her is at an all-time high. She has so many enemies at this point – enemies who could be feeling awfully vengeful. If GH fans thought Michael Corinthos (Chad Duell) was pushed to his limit before, we haven’t seen anything yet!

Of course, we can’t forget the Quartermaine clan – and even Harmony Miller (Inga Cadranel), who’s bound to be upset over Willow’s heartbreak. Brad himself could be in the mood for revenge if he scores his freedom, too.

Nelle may have to sleep with one eye open! She’s half of Port Charles’ target at this point, so that’s surely one reason General Hospital writers want her to stick around.

After all, they could’ve just stuck Nelle back in prison and said that’s that. Instead, it looks like Nelle will continue to cause drama and will perhaps face some in return. A murder mystery is certainly possible – or at least a situation like with Cassandra Pierce (Jessica Tuck), who once ended up in a long-term coma.

If not, viewers may see some of these wronged PC residents band together and try to make Nelle slip up. They need to take Nelle down by any means necessary, so there could be another trap to put Nelle back in the slammer.