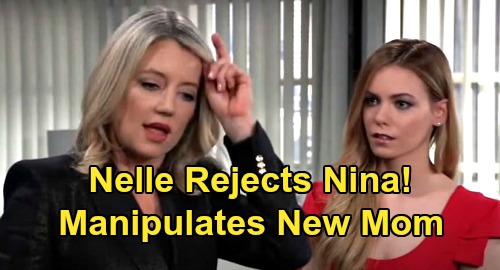 General Hospital (GH) spoilers tease that Nina Reeves (Cynthia Watros) will ultimately face a stunning revelation. The countdown is on to when Nina will realize Nelle Benson Archer (Chloe Lanier) has the other half of that heart pendant necklace. Nina has been longing for her daughter and can barely stand not knowing what happened to her. It seems like it’s been weighing on Nina more than ever lately.

Of course, that’s no coincidence since fans recently got confirmation on Nelle as Nina’s bio daughter. Based on how the big reveal played out, there should be no doubt left in your mind that Nelle’s indeed Nina’s biological child. This is the path GH writers have chosen, but what happens after Nelle and Nina find out the truth?

General Hospital spoilers say Nina will connect with Nelle in the coming episodes, but that doesn’t mean their bond will remain strong. It would be far more dramatic to rev up the conflict between Nelle and Nina before they face that shocker.

That could certainly happen if Nina stands against Nelle at the custody hearing, which is what her initial plan was.

It would be an interesting story for Nelle to reject Nina initially. Will Nelle insist she wants nothing to do with her new mom? That might even be a strategy on Nelle’s part.

Nelle couldn’t be accused of preying on Nina’s vulnerability or trying to mooch off her in any way. If Nelle turns her back on Nina, she can make Nina do all the work.

Nelle might do that partly out of anger and partly as a sneaky tactic. It’s clear that Nelle’s a master manipulator. She knows how to play the game! Rejecting Nina is only going to make her more determined to reach out to Nelle and help her.

Nelle likes to play the victim, so this may be her latest way of doing it. Nina’s devastation will leave her desperate – and Nelle can use that to her advantage.

It’s possible Nelle and Nina could form an actual bond in time, but there should be plenty of issues to overcome before they reach that point. Regardless, General Hospital spoilers say Nina’s sure to want Nelle in her life, even if Nelle isn’t the ideal daughter!

We’ll offer updates as other GH news becomes available. Do you think Nelle will reject Nina? Will Nina be manipulated once she’s reunited with her long-lost child? Be sure to pop back in at CDL for the hottest General Hospital spoilers, news and updates.