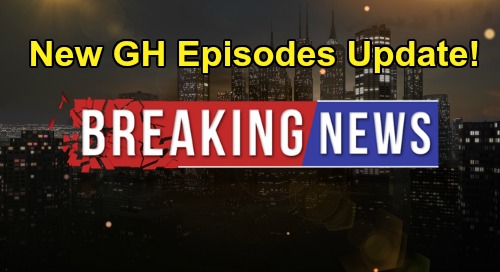 General Hospital (GH) spoilers has some news to pass on about when GH might be able to begin filming again. As you might be aware, the show films in Los Angeles County, and last week the entertainment industry issued a white paper which set forth guidelines for social distancing on TV and film sets. It seemed to be the industry’s way of demonstrating that it is getting ready and planning its return.

Well, now there are reports that Los Angeles County will be issuing its own guidelines for film and TV production, and that it will officially allow filming to resume as soon as Friday, June 12th. The official announcement is expected sometime today, Thursday, June 11th.

Of course, just because filming can resume on June 12th doesn’t mean that everything will be magically up and running on that day, nor that GH and all of its actors and crew will be instantaneously back and churning out episodes. It’s likely going to take some time for the show to get up and going, and especially to make sure that it’s complying with all of the county’s and its own rules.

For example, the rules that the industry set forth for itself in its white paper included regular COVID-19 testing, temperature screenings, and symptom monitoring, as well as social distancing protocols, hand-washing requirements, and the like. These new procedures will likely take some time to implement, and they will likely delay and slow production.

The non-profit organization that handles film permits – FilmLA – declared in a statement that it will be reactivating, and that it would probably be able to start accepting applications for permits on Monday, July 15th.

So, technically, it seems that GH will be able to file for a permit starting on Monday, June 15, but it remains to be seen how long after that filming will actually be able to begin, considering all the new testing and safety requirements that must be in place prior to production.

If you consider that all actors and crew need to be tested and cleared prior to filming, that right there will take a considerable amount of time.

We should note that Australian and British soaps seem to be ahead of the game when it comes to restarting, since they were preparing to return during the shutdown. That’s likely why Coronation Street (a British soap) was able to begin filming yesterday.

So, the bottom line here is that while the process to getting GH back into production may begin very soon, that process is likely going to take a while before actual filming begins. And then after filming begins, it will take some time for actual episodes to appear on our screens.

And, frustratingly, that means more waiting and more GH encore episodes for the time being. We’ll definitely keep you informed as we hear more about GH’s production schedule and when we can expect to see new episodes. Stay tuned to the ABC soap and be sure to keep CDL bookmarked for the latest General Hospital spoilers and news.