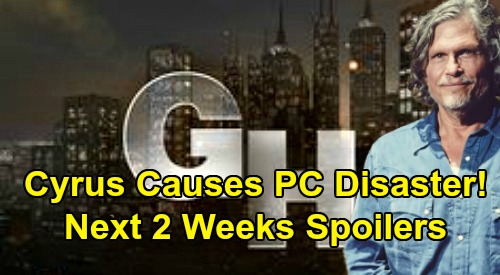 General Hospital (GH) spoilers for the next two weeks tease that some chaos is in store. During the week of February 24-28, Nelle Benson Archer (Chloe Lanier) will refuse to budge on her bogus tale. That’s her story and she’s sticking with it! Carly Corinthos (Laura Wright) will offer a stern warning, but Nelle won’t be afraid of anything her enemy might dish out.

However, Carly won’t hesitate to play dirty if need be. She’ll even tell Sonny Corinthos (Maurice Benard) that someone has to stop Nelle for good! Nelle could become a deadly target if her plan to escape consequences works out.

As for Brad Cooper (Parry Shen), he’ll back Julian Jerome (William deVry) into a corner. Unless Julian can hire a lawyer to help Brad get off the hook, Julian’s role in the baby swap cover-up will be exposed.

Julian won’t want that to happen, so he’ll do his best to get Brad out of trouble. That decision may not go over well with Sam McCall (Kelly Monaco), who’ll blast Julian in the week ahead.

Of course, there’s also a chance Sam won’t buy that Julian was in the dark. At the very least, Sam should be upset that Julian’s fighting to clear Brad after all the pain he caused Lucas Jones (Ryan Carnes).

As for Alexis Davis (Nancy Lee Grahn), she’ll do some reflecting. Alexis will mull over what might’ve been and most likely pine for Neil Byrne (Joe Flanigan). They could’ve been on the verge of a real love story, but it was cut short due to this medical license situation.

Alexis has accepted that, but perhaps there’s still a chance she’ll reconnect with Neil since she’ll have him on her mind.

Josslyn will think that’s strange since they’ve always been adamant that they only liked each other as pals. She’ll indeed find herself battling some jealousy as Trina and Cam kick off their first “date.”

Sadly, that date could end in disaster! General Hospital spoilers say there’ll be an attack on Port Charles right around the time of the winter formal. This will undoubtedly be connected to Cyrus Renault (Jeff Kober), so that’ll bring a bit of story collision.

During the week of March 2-6, multiple victims will be rushed to GH for treatment. An upset Sonny will be looking for answers while Jordan flies into a rage. Cyrus’ latest move will cause some chaos and injuries, so it’ll be more important than ever to stop him.

General Hospital spoilers, updates and news say Laura Collins (Genie Francis) will be hopping mad over all this destruction. She’ll rip into Sonny over all the drama, but Jason will suspect there’s more to the story. It won’t be long until Jason’s grilling Curtis Ashford (Donnell Turner) and trying to pry some info out of him.

Over with Willow Tait (Katelyn MacMullen), the reality of life without Wiley Corinthos (Erik and Theo Olson) will be hard to face. As Willow struggles, Harrison Chase (Josh Swickard) will need help from Michael Corinthos (Chad Duell). He’ll hope Michael has some good advice to pass along.

Back with Nelle, she’ll have a run-in with Alexis. That apparently means Nelle will walk out of the PCPD, so it appears she’ll indeed be cleared. You can bet Carly will blast Nelle with everything she’s got soon after!