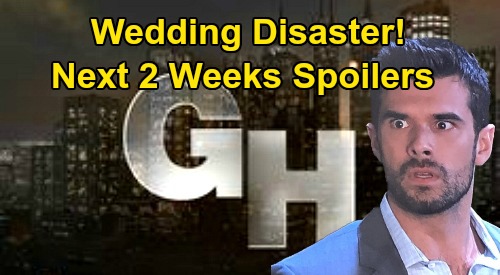 General Hospital (GH) spoilers for the next two weeks tease that some surprises are in store. During the week of May 11-15, Lucy Coe (Lynn Herring) will receive a stunning phone call. Sonny Corinthos (Maurice Benard) will summon Lucy to officiate Michael Corinthos (Chad Duell) and Willow Tait’s (Katelyn MacMullen) wedding, so she’ll pass along the news to a heartbroken Sasha Gilmore (Sofia Mattsson).

Of course, this was the plan all along. Sasha wanted to push Michael away by pretending she cheated with Harrison Chase (Josh Swickard). However, it’ll be difficult for Sasha to know Michael’s off marrying another woman.

Over with Willow, she’ll get Carly Corinthos’ (Laura Wright) admiration for what she’s doing. Carly will truly appreciate how much Willow loves Wiley Quartermaine-Corinthos (Erik and Theo Olson) and how far she’s willing to go for him.

General Hospital spoilers state that Michael’s family will gather around for the rushed wedding, so Willow may be a bit overwhelmed. This will be awkward to say the least!

It also looks like Chase may cause a horrible wedding scene that leaves Carly furious. Chase might be prevented from coming clean, but Carly won’t be happy – no matter how this goes down.

Later, Olivia Quartermaine (Lisa LoCicero) will get some troubling news. She’ll be quite upset and so will Sonny. General Hospital spoilers point to plenty of pain for Sonny in the week ahead, so will this be about his father or his son.

Mike Corbin (Max Gail) will inevitably pass away soon, which would be a good reason for Sonny to face so much sorrow. Then again, this could involve Dante Falconeri (Dominic Zamprogna) updates since Olivia will be distressed the same day. There have been a ton of Dante mentions lately, so it has to be building to something.

As for Nelle Benson Archer (Chloe Lanier), she’ll be busy blackmailing Julian Jerome (William deVry). After overhearing that Julian was behind the car crash that put Lucas Jones (Ryan Carnes) in a coma, Nelle will use it against Julian. He’ll have to follow orders if he wants that secret kept under wraps.

Nelle will want Julian to testify, but could she want to marry him, too? GH fans can expect Nelle to even the odds she’s facing with Michael somehow, so marriage might be necessary to do that. During the week of May 18-22, Nelle will announce something that rocks the courtroom. Introducing Julian as her husband might fit here.

Sonny will battle some serious suspicions, so Julian had better watch his back! Over with Diane Miller (Carolyn Hennesy), she’ll meet with Carly – most likely to prep her before she gets on the stand. Carly gets dragged big time thanks to Martin Gray (Michael E. Knight), who’ll destroy Carly’s credibility. Michael will also find himself playing defense after “Marty” goes hard!

Back with Sonny, he’ll demand answers. Julian may be the one Sonny demands them from if Julian’s helping Nelle. Nina Reeves (Cynthia Watros) will also have to decide where her loyalty lies in court, so stay tuned.

Other General Hospital spoilers say Nelle will ultimately give a memorable, melodramatic performance. She’ll hope it’s enough to convince the judge she should have shared or even full custody.

Anna Devane (Finola Hughes) can tell there’s more to the story of Holly’s death, so maybe she can team up with Robert and figure out the facts.

Finally, General Hospital spoilers say Valentin Cassadine (James Patrick Stuart) has a huge announcement coming up. Will this bring the ELQ takeover reveal or will GH hold off on that? Either way, Valentin will drop a bomb!