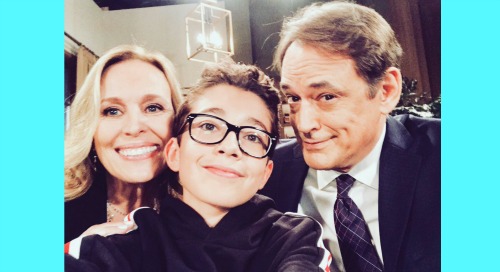 General Hospital (GH) spoilers tease that one ABC soap star is hoping to make another return. GH fans know Nicolas Bechtel briefly got back in the action as Spencer Cassadine. After Nikolas Cassadine (Marcus Coloma) finally revealed himself to Port Charles, he headed to Spencer’s boarding school with Ava Jerome (Maura West) and attempted to explain his actions.

Unfortunately, Spencer wasn’t willing to forgive and forget. He was understandably hurt that Nikolas would knowingly let him grieve and stay away all that time. Nik was busy plotting his next moves on Valentin Cassadine (James Patrick Stuart), but he didn’t have his priorities straight. What Spencer really needed was his father.

As a result, Spencer’s giving Nik the cold shoulder. He recently sent Nikolas a letter that contained some pretty harsh and hurtful things. Spencer suggested Nik was still dead to him and that he was lucky to be an orphan.

However, teenagers can be dramatic – as Elizabeth Baldwin (Rebecca Herbst) pointed out. Spencer is probably the most dramatic one alive based on his previous behavior on GH! Liz urged Nikolas to give Spencer some space. There’s a good chance Spencer’s wounds will start to heal in time.

Once Spencer’s cooled off and perhaps more willing to forgive Nik, should he make another comeback? Many General Hospital fans would like to see Spencer in Port Charles again. It’d be nice for Spencer to interact with Laura Collins (Genie Francis) and some of his other loved ones along with Nikolas.

Bechtel is also hoping Spencer will rejoin the drama at some point. On Twitter, a GH viewer tweeted about how much she’d like to have Spencer in town. “#GH get Spencer back in Port Charles @NicolasJBechtel,” the fan insisted. “I know, right????!” Bechtel said in his response. It’s clear that Bechtel’s open to another comeback and is just waiting on General Hospital to make it happen.

Other GH watchers expressed their desire for Spencer’s return as well. “Grandmother has been shot, and Spencer isn’t by her side? We need him!!” one viewer tweeted. “With all the Spencer talk today, I expect you back soon!” another fan said.

General Hospital spoilers, updates and news say Nikolas and Ava will be busy scheming against each other for a while, which should give Spencer some time to open his heart to his father again. Would you like to see Bechtel reprise the role? Should Spencer return home and for a longer visit?

It sounds like some great stuff’s brewing on the ABC soap. As other news rolls in, CDL will have plenty of updates for you. Don’t forget to check in frequently and keep up with all the latest General Hospital spoilers,