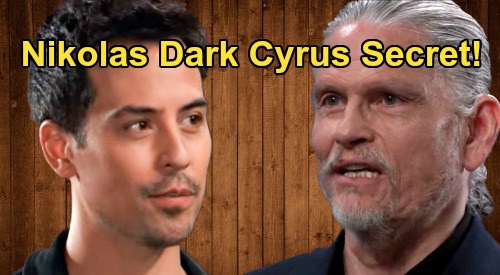 General Hospital (GH) spoilers tease that Nikolas Cassadine’s (Marcus Coloma) reaction to Cyrus Renault’s (Jeff Kober) release may have been a clue. GH fans know Nik was quite rattled by Cyrus scoring his freedom. Nikolas was concerned for Laura Collins (Genie Francis), who was shot as a result of Cyrus’ war with Sonny Corinthos (Maurice Benard). However, perhaps there’s more to the story.

Could Nik also be worried for himself? Does Nikolas have a secret Cyrus connection? General Hospital seems to have let Nikolas fade to the background a bit lately.

They really need to step up their game and use this recast more effectively. Why go to the trouble of bringing Nik back if they’re just going to have him stand around and bicker with Ava Jerome (Maura West)?

This would be an excellent opportunity to put Nik in the middle of another story and raise the stakes for him a bit. After all, GH fans have no way of knowing all the details of Nik’s time offscreen. He sure still has a few secrets he’s hiding – and a link to Cyrus could easily be one of them.

General Hospital viewers will recall that Nikolas was in cahoots with Cassandra Pierce (Jessica Tuck). Nik helped Cassandra escape with the intention of killing her at one point, but that plan didn’t pan out.

Cassandra met a grim fate after Valentin Cassadine (James Patrick Stuart) blew up the boat she was on – although a presumed death on a soap really isn’t much of a death at all.

Cassandra could easily come back in the picture one day, but GH may not even need her if she was tied to Cyrus. Maybe Nikolas was mixed up with both of them. Cassandra was a drug trafficker and international criminal like Cyrus is. GH fans will remember that Cassandra even tried to negotiate a deal with Sonny before getting rejected.

There are some similarities here that could indicate a reason for Cassandra to team up with Cyrus. Did Cassandra drag Nikolas into a mess with Cyrus? It’s certainly an option to consider based on Nik’s agitated reaction to Cyrus’ release. Nikolas may worry that Cyrus will make big trouble for him now that he’s out.

General Hospital could use a few more layers and surprises in this Cyrus storyline, so throwing Nikolas in the mix would be a good thing. Do you think Cyrus and Nik are connected? Did Cassandra get Nikolas caught up this mess? As other GH news emerges, we’ll have more updates to deliver.

It sounds like things are heating up in Port Charles. General Hospital fans will be eager to see what’s next for Nik, so don’t miss all the action. CDL’s the place to be for sizzling General Hospital spoilers, updates and news.