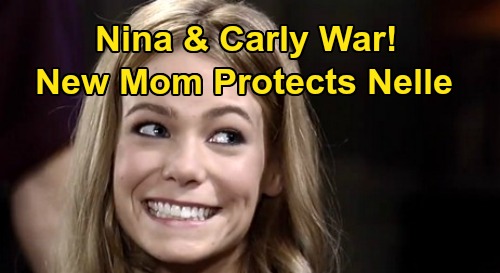 General Hospital (GH) spoilers tease that a major battle’s brewing in Port Charles. GH fans now know where the other half of Nina Reeves’ (Cynthia Watros) missing necklace is – and it’s at the bottom of Nelle Benson Archer’s (Chloe Lanier) keepsake box. Nelle is Nina’s long-lost child, so we’ll see the pieces start coming together for Nina to find out this shocker.

During the week of April 13-17, Nina will compare her past to Nelle’s and find some common ground. Carly Corinthos (Laura Wright) has mentioned Nelle being crazy before, but Nina objected to her use of the term. That led to Carly’s comments about Nina seeking the help she needed and how it was a different situation.

Nevertheless, Nina will still see some of herself in Nelle – as horrifying as that may be. After Nina opens up to Jasper “Jax” Jacks (Ingo Rademacher) about being more like Nelle than she wants to admit, Nina will have another chat with her bio daughter. Of course, Nina won’t realize the bio daughter part just yet!

Even so, Nina will learn a bit more about Nelle during the week of April 20-24. Perhaps Nelle will talk about the time she spent in a mental institution, which GH fans will recall Carly treated like some big “gotcha.”

It was almost like Carly was shaming Nelle when that information came out. That’s something that might score Nelle some sympathy points if she opens up to Nina about it.

General Hospital spoilers say Nelle will ultimately express her gratitude to Nina as their bond grows. This is really setting the stage for a nice connection after their link is revealed to them. Nina will start to see another side of Nelle – the softer side. Perhaps Nina will see some of the good in Nelle that she once saw before.

Nina hired Nelle as Charlotte Cassadine’s (Scarlett Fernandez) nanny at one point. Nelle later scored a job at Crimson before she was ultimately fired and now rehired. There have been many times when Nina showed concern for Nelle – like when she was aghast to learn Nelle had no relatives to contact after her mugging.

Nina insisted on sitting by Nelle’s bedside at GH and promised to be there for her. It’s wild to think Nina was supporting her own daughter and didn’t even know it.

There are certainly things General Hospital can bring up as they work this Nina-Nelle bonding angle. Naturally, this is going to set up a fierce war between Nina and Nelle’s longtime enemy, Carly. Once the bio daughter shocker comes out, Nina’s bond with Nelle is only going to strengthen.

Carly will undoubtedly try to remind Nina of all Nelle’s crimes and horrible behavior, but Nina won’t stand against her own flesh and blood. You can bet Nina will help Nelle as she continues to battle Carly and the Corinthos clan. Nelle’s going to have a strong ally on her side!

That’s bound to infuriate Carly, but it should provide some exciting drama. We’ll keep you posted on other GH updates and news. General Hospital spoilers say Nina will inevitably step up for Nelle when the time comes, which should make some waves in Port Charles. Don’t forget to drop by CDL regularly for hot General Hospital spoilers, updates and news.