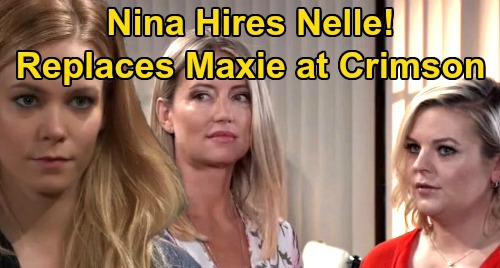 General Hospital (GH) spoilers tease that Nina Reeves (Cynthia Watros) is about to make a shocking move. GH fans know Maxie Jones (Kirsten Storms) has felt snubbed at Crimson for a while now. Maxie sometimes feels like she does all the work while her contributions are ignored. Plus, working at Crimson just isn’t much of a challenge anymore. It looks like it’s time for Maxie to move onward and upward.

Nelle, on the other hand, will soon find herself in familiar territory. During the week of March 23-27, General Hospital spoilers say Nina will give Nelle a job. Nelle will presumably be hired at Crimson to fill Maxie’s position.

Maxie will be get a warm welcome from someone in the week ahead, so that’ll probably be Lucy Coe (Lynn Herring). It seems Maxie’s decision will leave Nina short-staffed.

Of course, we have to ask…why Nelle?! Nina could surely find someone else who’d jump at the chance for a Crimson job – preferably someone who’s sane and doesn’t have a massive criminal record. Nina could have a line of eager fashionistas lined up around the block faster than you can say “now hiring.”

So why is Nina choosing Nelle when almost anyone would be better? There should be some decent reasons for that. For starters, it keeps the drama going and forces Nelle to interact with other characters. Soaps often take leaps that aren’t quite logical for that reason alone, but there should be more to the story here.

Nelle worked for Nina in the past – first as Charlotte Cassadine’s (Scarlett Fernandez) nanny and later at Crimson. Although Nelle was ultimately fired, at least Nina knows what she’s getting. Nelle was actually a pretty good employee for Nina once upon a time.

Nina also realizes Nelle has to be on her best behavior if she intends to fight for custody of Wiley Quartermaine-Corinthos (Erik and Theo Olson). That could leave Nina less worried about Nelle going wild on the job.

There’s even that age-old adage of keeping your friends close and your enemies closer. Nina may want to keep an eye on Nelle – especially if she starts to suspect Nelle and Valentin Cassadine (James Patrick Stuart) have been in cahoots.

Bottom line, General Hospital spoilers say Nina will weigh her options and decide the risk is worth it. Nelle will become a Crimson employee again, so this should be interesting!

The news of Nelle’s hiring should certainly spark some outrage. Don’t forget to stop by CDL frequently for GH updates. We’ll always have the latest General Hospital spoilers, updates and news posts to catch up on.