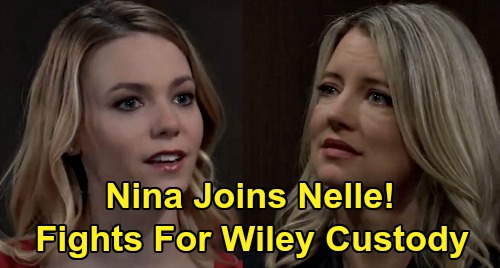 General Hospital (GH) spoilers tease that Nelle Benson Archer (Chloe Lanier) could soon have a secret weapon in her fight for Wiley Quartermaine Corinthos (Erik and Theo Olson). As GH viewers know, Nelle is vying strongly for sole custody of Wiley. Nelle wants nothing more than to have a big victory against Michael Corinthos (Chad Duell) and the Quartermaine family, and she’s willing to do just about anything to score a win.

Well, Nina Reeves (Cynthia Watros) recently decided that she wanted to help Michael, Carly Corinthos (Laura Wright), and the rest of the Corinthos and Quartermaine families in the custody case.

Nina agreed to give Nelle a job at Crimson, thinking that Nelle would eventually let something slip and then she could testify about it at the custody hearing to help Michael out. It seemed like a great plan, but soon it looks like Nina’s perspective may drastically change.

As GH viewers know, it was recently revealed on the show that Nelle is in possession of the other half of the half-heart necklace that Nina’s mother left her, and that Nelle has had the necklace ever since she was a child. Yes, Nelle is Nina’s long-lost daughter!

And now that Nelle is working at Crimson and will surely see Nina fiddling with her half of the necklace at some point, it seems that the truth about Nina and Nelle being mother and daughter is bound to come out.

And assuming that the truth comes out before the custody hearing, that could really change the game for Nelle. After all, Nelle will have gone from someone with no real ties in the community and with no one to vouch for her to having her mother right there.

And Nina will suddenly go from having no child to having her daughter Nelle in her life plus a beautiful grandson.

Now, Nina’s not going to suddenly condone everything that Nelle has ever done just because she finds out that Nelle is her daughter, but certainly Nina will want to help Nelle fight to make her life better, and that will probably include fighting for Wiley.

It’s pretty hard to imagine Nina not helping Nelle in some fashion once she finds out that Nelle is her daughter.

And so this means that Nina will surely support Nelle in some fashion, and we all know that Carly will fiercely support Michael against Nelle. That will probably mean that Nina will go up against Carly at some point, and that Nina will align against the Quartermaine and Corinthos families. It’s going to be quite the battle!

Of course, maybe once Nelle has her mother’s influence in her life, she’ll opt to drop the suit for sole custody. Nina could ultimately be a wonderful influence on Nelle, and perhaps she’ll be able to help broker a peace deal where Nelle and Michael could have shared custody of Wiley.

That would mean that Michael would have to agree, though, which seems pretty unlikely at this point. Probably the more realistic scenario is a major custody war, with Nina aligning with Nelle against the Qs and the Corinthos family.

Do you think that Nina will fully support Nelle in her quest to get custody of Wiley? Stay tuned to the ABC soap and keep up with CDL for all the hottest General Hospital spoilers and news.