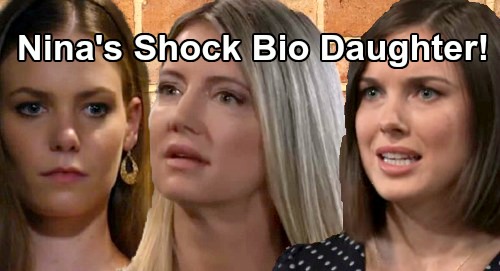 General Hospital (GH) spoilers tease that one important storyline is about to rev up. GH fans have been seeing more of that crucial half-heart pendant again, which lets us know Nina’s on the verge of discovering her biological child. Nina’s true daughter must still be out there somewhere.

In fact, she’s probably much closer than Nina thinks! Now that this storyline is being brought back to the forefront, it’s worth revisiting the topic of who that bio daughter might be.

Since this daughter is most likely someone GH viewers already know, let’s go ahead and rule out the idea of the show bringing in some random person. They currently have enough females in that age range and the revelation would have no real impact.

Nina’s daughter has to be somebody fans are familiar with, so that narrows things down a bit. That necklace helps as well since it’s become so important – and Sasha Gilmore (Sofia Mattsson) doesn’t have it.

Some fans thought Sasha might be Nina’s daughter after all since her DNA tests were always rigged. They were hopeful that a real one might prove Sasha was actually Nina’s in an intriguing twist of fate.

However, Sasha was adamant that she didn’t have the other half of the heart-pendant necklace. General Hospital clearly wants to do a dramatic shocker where Nina finds the person with the other half, so it can’t be Sasha.

That leaves us with two major – and wildly different – daughter candidates. It all depends on how GH wants to take this story.

At one point, Nina was contemplating the necklace before GH cut straight to Willow Tait (Katelyn MacMullen). However, Nina was also recently mulling over her bio daughter before they cut straight to Nelle Benson Archer (Chloe Lanier).

At this point, Willow and Nelle seem like the best options for this big daughter reveal. General Hospital has been laying the groundwork for Willow to be Nina’s daughter for quite some time.

That’s obviously what that feud between Nina and Willow was all about. If Nina found out Willow was her daughter, they could move beyond that old friction and form a solid connection. Willow’s a sweet gal, so Nina really couldn’t do any better in the daughter department.

Of course, Nelle is on the total opposite end of the spectrum! If GH wants to give Nina the worst daughter possible, they’ll give her Nelle. Since Nina was drawn to Nelle once upon a time and tried to help her, the “Nelle is Nina’s bio kid” angle would make sense, too.

This could also help mend Sasha and Nina’s bond. Sasha was part of Valentin Cassadine’s (James Patrick Stuart) scheme to deceive Nina, but she felt horrible about it.

Sasha also grew to love Nina dearly and is a saint compared to Nelle. Sasha might slide into a fill-in daughter role after Nelle inevitably gets sent back to Pentonville or even killed off.

That brings up another interesting point. Nina has always longed for a child of her own. Despite not wanting to reopen this wound, she’d like to get to know her bio daughter deep down.

It would be a brutal blow for Nina to find out Nelle the psycho is her flesh and blood. There’s no way Nina could ever have a real relationship with her. Nelle is manipulative, crazy and only cares about herself.

Making Nelle Nina’s daughter would be one way to put the story to rest – and as we mentioned, Nina could still have a substitute daughter in Sasha. No matter how this turns out, General Hospital spoilers say this storyline’s going to bring some hot drama.

Do you think Nina’s bio daughter is Nelle or Willow? Which one would be the better option? We’ll give you updates as other GH news comes in. Stay tuned to the ABC soap and don’t forget to check CDL often for the latest General Hospital spoilers, updates and news.