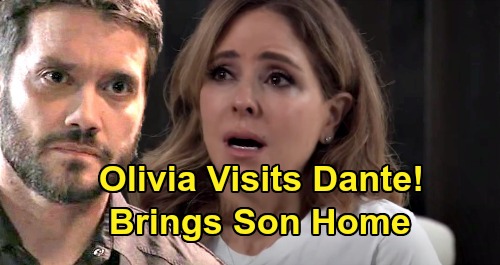 General Hospital (GH) spoilers tease that Olivia Quartermaine (Lisa LoCicero) will soon have a big trip ahead of her. As GH viewers know, Olivia recently heard some news from Robert Scorpio (Tristan Rogers) about her son Dante Falconeri (Dominick Zamprogna).

Robert revealed that he had heard from a contact in the bureau, and that he could sneak Olivia into see Dante at the WSB facility in Geneva. Of course, Olivia was thrilled, and she jumped at the chance to have some contact with her son again.

Well, as GH viewers are aware, Dante is still of the mind that he wants to stay in captivity and as far away from his family as possible – for their safety.

Dante has gone through periods of dangerousness, and he even ended up freaking out and shooting Peter August (Wes Ramsey) when Peter and Maxie Jones (Kirsten Storms) tried to see him at one point. Clearly, Dante has suffered greatly, and he’s prone to acting out.

Still, General Hospital spoilers say Dante will be the subject of a mom ambush soon, as Olivia and Robert should head to Geneva, probably after a slight delay since Brook Lynn Quartermaine (Briana Lane) has recently been attacked by Nelle Benson Jerome (Chloe Lanier).

Something tells us that Dante might not be initially thrilled to see Olivia, but since Dante is back to GH, General Hospital spoilers indicate that he’ll be back in Port Charles soon.

But what will Olivia say to Dante that might make him willing to come back home? Olivia isn’t one to keep her thoughts and feelings to herself, so she’ll likely ramble on a mile a minute to her son, and that means that Dante could learn all about Lulu Spencer (Emme Rylan) and her new relationship with Dustin Phillips (Mark Lawson).

And Olivia will surely mention the fact that Rocco Falconeri (O’Neill Monahan) has started to look to Dustin as a father-figure.

One wonders if that will be enough to convince Dante that he needs to come home. Who knows, Olivia could even mention the attack on Brook Lynn and/or the threat of Cyrus Renault (Jeff Kober) in Port Charles, which could motivate Dante to want to return home.

Olivia might even let Dante know about Mike Corbin’s (Max Gail) demise, which could get Dante thinking about coming home to support Sonny Corinthos (Maurice Benard).

Of course, another option here is that Dante’s return to Port Charles won’t be voluntary – Olivia could have a long talk with Dante’s physician at the WSB facility and make arrangements that Dante isn’t totally on board with.

GH buzz says it looks like Dante’s going to head home soon. Perhaps he’ll be transferred to a facility closer to Port Charles so that he can have some contact with Rocco.

Dante would need to be watched pretty closely, given his PTSD symptoms and his past shooting of Peter, but that he could easily be located closer to home if Olivia pushes hard enough.

We’ll see what happens here, but we know that GH fans are excited to have Dominic Zamprogna back on canvas, and we’ll all be happy to see Dante back in Port Charles when the time comes!

Stay tuned to the ABC soap and don’t forget to keep CDL bookmarked for all the latest General Hospital spoilers, daily episode recaps, and news.