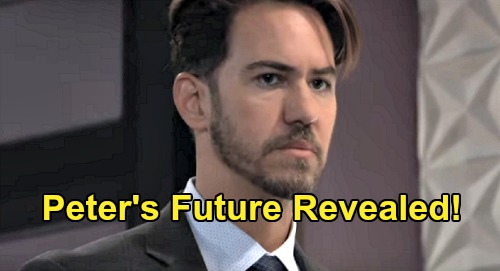 General Hospital (GH) spoilers tease that Peter August (Wes Ramsey) is inching closer and closer to devastation. GH fans know Peter’s done everything in his power to keep his relationship with Maxie Jones (Kirsten Storms) from falling apart. The guilt seems to be eating away at Peter sometimes, but he’s determined to keep up the good guy act and put his past behind him.

The trouble is Peter keeps letting himself get pulled back to the dark side. Peter ordered Andre Maddox’s (Anthony Montgomery) stabbing and was responsible for Drew Cain’s (Billy Miller) presumed death.

Peter’s the reason Andre almost died again – and Franco Baldwin (Roger Howarth), too! If Peter hadn’t been able to stop his hitman, things could’ve had an extremely grim outcome.

However, General Hospital has consistently portrayed Peter as someone who’s kind to children. They always try to give Peter a sympathetic side – and he genuinely seems to love Maxie. That doesn’t mean Peter’s treating Maxie right, but it does show he’s not a complete monster.

There’s always been talk about how Peter isn’t his father, Cesar Faison (Anders Hove), which is true. Peter certainly has more of a heart. Even so, there’s the potential for a deeper evil inside him.

It all depends on the ending GH has in mind for Peter. They tried to redeem Peter once and then blew it all up with this storyline, which will inevitably end in a horrible downfall.

It’s possible General Hospital did all this knowing they would ultimately write Peter out. If so, we could see Peter get even darker in the coming months. There’ll be no reason to preserve the good in Peter, so he might lose all control after Maxie’s gone from his life.

GH could be using Maxie as the anchor that keeps Peter from drifting into full-blown sinister territory.

In that case, Peter could easily be on his way out. Nevertheless, General Hospital has kept that softer side in their back pocket – presumably in case they decide to keep Peter around. They may tackle the redemption angle once again, although we’d like to think Maxie would be smart enough to dump him permanently!

Whatever the case, General Hospital spoilers say Wes Ramsey’s future with the show is still uncertain. It almost feels like they’ve done about all they can do with his character, but maybe GH writers have a few more tricks up their sleeve.

It’ll be interesting to see what’s in store for Peter as Jason Morgan (Steve Burton) and the rest of the Peter takedown crew close in.

Do you think Peter will stay or go? Would you miss Peter? We’ll give you updates as other GH news emerges. Stick with the ABC soap and don’t forget to check CDL often for the latest General Hospital spoilers, updates and news.