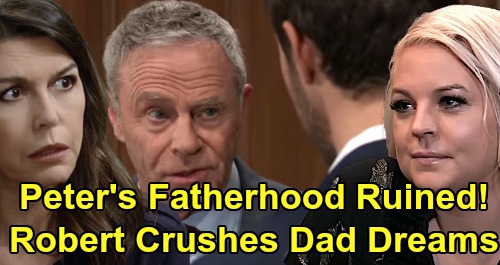 General Hospital (GH) spoilers tease that Maxie Jones (Kirsten Storms) may soon have some big news to impart on her loved ones. As GH viewers will remember, Maxie recently had a near-fainting spell at Deception, and later she barely touched her lunch when dining with Peter August (Wes Ramsey).

This all seems to be adding up to a Maxie pregnancy, and one wonders how Maxie and Peter will handle the news. Maxie will probably be stunned but ultimately happy about the development. After all, she’s currently oblivious to all of Peter’s recent misdeeds and crimes.

As GH viewers know, Peter committed cold-blooded murder when he shot and killed his own henchman after changing his mind about having the henchman kill Franco Baldwin (Roger Howarth) and Andre Maddox (Anthony Washington).

Of course, if Maxie knew about Peter’s actions, she might think twice about bringing his child into the world, and/or letting Peter be a part of the baby’s life. But since Maxie doesn’t know about Peter’s continuing dark side, she’ll probably end up being thrilled about the pregnancy and may be more open to the idea of marrying Peter.

One can imagine that Anna Devane (Finola Hughes) will be happy about the pregnancy as well – after all, it will be her chance to be a grandmother again. Anna may have some lingering fears about Peter, but she’ll likely remain steadfast in her defense of her son against naysayers like Robert Scorpio (Tristan Rogers).

In fact, Anna will probably love to see how having a baby affects Peter and helps him to develop as a person. Anna might even think that seeing Peter as a dad-to-be may make Robert calm down a bit in his fervor over proving that Peter has an evil side.

But we suspect that a baby on the way might make Robert even more likely to want to prove that Peter is still the evil “Heinrick” that he thinks Peter is. After all, the stakes will be higher, and Robert might think that now there’s an innocent baby that needs to be protected from the likes of Peter.

Of course, right now Robert is distracted by the supposed death of Holly Sutton (Emma Samms), and he’ll likely be distracted by that for a while. But once he finds out that Peter and Maxie are expecting a baby, that could snap him back into “anti-Peter” mode pretty quickly.

And that could really get him on Anna’s bad side, since Anna is probably going to be even more protective of Peter since he’s got a baby on the way.

We’ll see what happens here, but at some point, we expect Robert to pick up his investigation into Peter, and he’ll probably want to prove his theory about Peter’s true self before the baby comes.

Do you think that Robert will get even more determined to go after Peter once he finds out Peter’s going to be a dad? Stay tuned to the ABC soap and don’t forget to check CDL frequently for the latest General Hospital updates and news. We’ve got you covered!