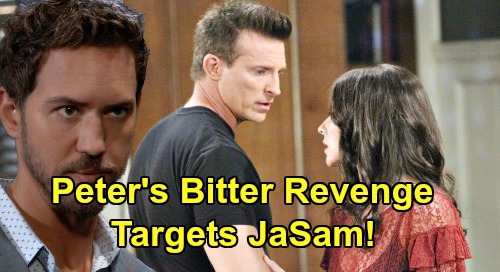 That’s why he’s counting on Jason and Sam McCall (Kelly Monaco) to come through with some hard evidence.

Jason and Sam are certainly motivated since proof will mean they can be together. However, could Peter’s takedown actually be another path toward tearing them apart? For whatever reason, GH likes to deliver obstacle after obstacle when it comes to “JaSam.” They never get to live in a happy little bubble for long.

In one way, that’s good since it keeps the drama going. It’s always nice to see Jason and Sam fight for love!

Even so, many “JaSam” fans are growing weary from that fight. They’re ready to see Sam and Jason have a little period of bliss, but they may have to wait a bit longer.

General Hospital spoilers say Peter is definitely going down, but will he drag Jason into danger when it happens? After all, Peter’s proven that Maxie is what’s most important to him.

What’ll happen if Jason yanks what matters most away? Jason seems poised to lead the takedown charge, so he could put himself right in Peter’s deadly path.

Once Peter realizes he’s lost Maxie forever, will he feel he has nothing left to lose? That could make Peter determined to rob Jason of his true love and family, too.

Peter kept Jason alive so he could go after Cesar Faison (Anders Hove), but maybe he’ll decide that was the wrong call. This time Peter may make Jason his deadly target.

Naturally, Jason isn’t going to die, but he could end up in pretty bad shape if this showdown ends in disaster. If Jason’s forced to recover in the hospital, that could be the next “JaSam” setback.

Whatever the case, it’s worth considering the risk this Peter mission poses. Peter probably isn’t just going to willingly hand himself over to the cops, so that definitely sets up the potential for peril.