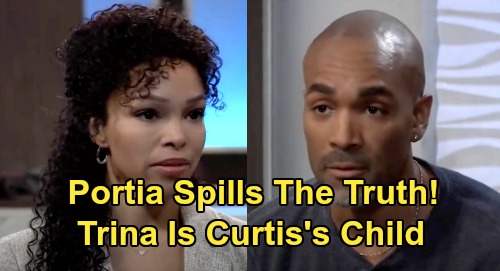 General Hospital (GH) spoilers tease that Trina Robinson (Sydney Mikayla) and Portia Robinson (Brook Kerr) will attract some unwanted attention in the coming weeks. Cyrus Renault (Jeff Kober) will get a bit too close for comfort – most likely due to Portia and Trina’s connection to Marcus Taggert (Real Andrews).

Perhaps getting rid of Taggert wasn’t good enough for Cyrus. He may set out to destroy Taggert’s family as well – especially if Trina pushes Cyrus’ buttons or Cyrus sees some opportunity to get what he wants.

Then again, there’s a good chance Taggert faked his death – and that’s something Cyrus could start to suspect. Trina doesn’t have a clue at this point, and Portia seems out of the loop as well. Even so, Cyrus could feel like they’re holding back or just determined that that his revenge on Taggert isn’t complete.

Either way, Curtis Ashford (Donnell Turner) won’t like this one bit. General Hospital spoilers say Curtis will monitor the situation closely and do his best to watch out for the Robinsons. Curtis will feel obligated since Taggert pushed him to look after Trina before his death.

Plus, Portia happens to be a former flame of Curtis’ and that’s always going to be a factor. There’s history here – history that GH could choose to revisit. General Hospital could easily take the story in that direction, especially if Portia and Curtis get trapped together somewhere.

That’s within the realm of possibility with a baddie like Cyrus causing drama. Will Cyrus’ actions lead to extreme danger? Will Portia and Curtis’ true feelings come rushing to the surface when their lives are on the line? It’s easy to imagine a life-threatening crisis bringing some major confessions.

In addition to any romantic admissions, Portia may also admit a massive secret. She told Curtis she was certain that Trina was Taggert’s daughter, but is that really true? Portia has been known to lie, so that’s probably what she was doing this time, too. All signs point to Curtis being Trina’s biological father, which could be something Portia divulges in a dangerous moment.

If Portia believes they’re both going to die, that could prompt this confession to Curtis. Portia wouldn’t want to take a secret like that to her grave. She wouldn’t want Curtis to die in the dark either. Of course, this could create major issues since Curtis and Portia will undoubtedly survive whatever Cyrus has in store!