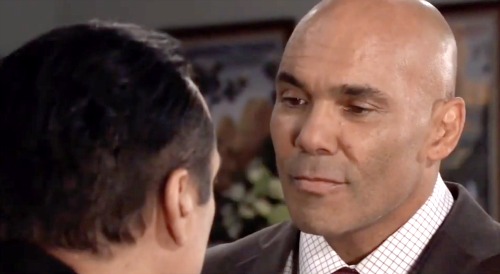 General Hospital (GH) spoilers reveal that a big comeback has been a hit with fans. GH viewers are freaking out in the best possible way about a blast from the past. Real Andrews’ return as Marcus Taggert is a welcome surprise – and now Andrews is speaking out about reprising the popular role.

On Twitter, Andrews has been responding to fans’ messages and creating buzz about his return stint. Some fun stuff’s in store, so Andrews is looking forward to everything that’s set to play out. He shared how he felt about his return and offered a tip for those looking for some extra info.

“Great to be back make sure you follow me on instagram @realandrews and twitter @realandrews so you don’t miss to stay up to all the juicy details,” Andrews said. It sounds like Andrews might post some behind-the-scenes treats, so GH viewers will want stick with his social media accounts for some surprises.

There have been loads of supportive tweets since word started to spread about Andrews’ comeback. Tons of General Hospital watchers are excited about having Taggert back in action. “THE THORN IN SONNY CORINTHOS & JASON MORGAN’S PAW IS BACK!!!!!!!!” tweeted one enthusiastic fan. Another fan said, “I really hope we get a chance to hear Taggert call Jason ‘Anger Boy.’”

One more fan gushed, “Taggert’s back! Oh this is about to be good!” It’s awesome to see everyone hyped up over the return of Andrews’ character. Taggert hasn’t been seen on General Hospital since 2003, so it’s definitely been a while.

It sounds like Sonny Corinthos’ (Maurice Benard) could have a real problem on his hands if he crosses Taggert, which is fantastic news. Sonny needs a serious threat around to keep him in line! It’ll be interesting to see Jason Morgan’s (Steve Burton) reaction as well. Having a familiar face in the mix is always a good thing, especially if it’s one that can cause some shakeups.

Great to be back make sure you follow me on instagram @realandrews and twitter @realandrews so you don’t miss to stay up to all the juicy details https://t.co/aPmJrntLI4