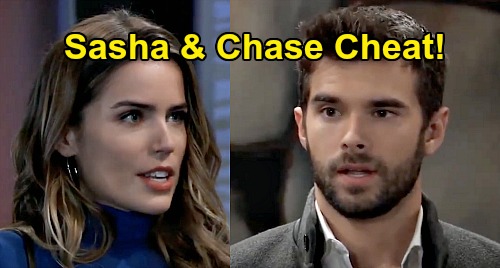 General Hospital (GH) spoilers tease that Harrison Chase (Josh Swickard) and Sasha Gilmore (Sofia Mattsson) will come together for a secret meeting and strategy session. GH fans know Michael Corinthos (Chad Duell) would have a better chance of scoring full custody of Wiley Quartermaine-Corinthos (Erik and Theo Olson) if he had a perfect wife to serve as a fill-in mom.

Of course, Chase and Sasha know that, too. After Sasha brought up the idea of Willow Tait (Katelyn MacMullen) marrying Michael, Chase immediately flipped out. However, things are changing – especially since Willow’s such a mess right now.

Since Chase knows how much Wiley matters to Willow, he’ll agree to make a huge sacrifice for his girlfriend’s sake. Sasha will be on the same page about putting Wiley first. There’s nothing more important to Michael than his son, so Sasha wants to help somehow.

After Sasha talks everything over with Chase, a plan will form. It’s one that’ll be dreadful and drastic, but Sasha and Chase just won’t see any other way. They won’t think Michael and Willow will agree to marry unless they get a big push from their respective partners.

From the sound of all this, it won’t be enough for Chase and Sasha to offer their blessings. That wouldn’t be a desperate move like General Hospital spoilers indicate.

So what will Sasha and Chase do to convince Michael and Willow to marry? There are a couple of options that immediately come to mind – and neither one of them is good!

The first one is that Chase and Sasha might sleep together. They might hope that the sting of their betrayal would push Willow and Michael into a “Millow” marriage.

The problem is this decision wouldn’t really be in character for either one of them. We get that Sasha and Chase are taking drastic action here, but that just seems awfully extreme – even under these dire circumstances.

Still, a Chase and Sasha hookup is another option to consider. There’s another possibility to mull over though – one that would achieve the desired effect without actually doing the deed.

What if Chase and Sasha stage a scene where they appear to be cheating? In other words, they may not truly hook up, but they might make Willow and Michael think that’s what happened.

Chase might know when Willow’s going to walk in and make it so he’s shirtless in bed with scantily clad Sasha. Since Willow also knows they were talking behind her back and keeping Michael out of the loop as well, Chase and Sasha could sell the idea of an affair.

The last thing they want to do is hurt Willow and Michael, but they may pretend they betrayed them for their own good.

General Hospital spoilers hint that Michael and Willow’s wedding is indeed coming up, so it looks like this painful plan will pay off! As other GH news becomes available, we’ll pass along more updates.

Do you think Chase and Sasha will cheat or at least pretend to? CDL’s your hotspot for exciting General Hospital spoilers, updates and news.