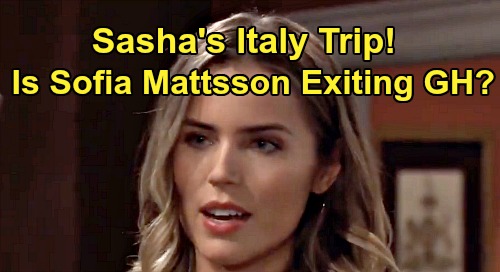 General Hospital (GH) spoilers reveal that Sasha Gilmore’s (Sofia Mattsson) future on the ABC soap may be in jeopardy as story arc hints indicate she might be exiting. GH fans know Sasha’s career is taking off, which could be a bad sign. She talked to Michael Corinthos (Chad Duell) about Italy expansion plans for the Face of Deception, so that was kind of a strange conversation to begin with.

Whenever something seems unusual, it’s typically a sign that it’s going to mean something. After the big Wiley Corinthos (Erik and Theo Olson) reveal, Michael and Sasha had a brief heart-to-heart about him adding a son. Sasha’s response seemed nice enough on the surface, but let’s look a little deeper. It likely wasn’t as hopeful as it sounded.

Sasha pointed out that they love each other and that’s good enough for now. She knew Michael was already overwhelmed and suggested this was one decision they didn’t have to make just yet. Of course, if Sasha was all in on helping raise Wiley, there’d be no need to put off the decision. Sasha would’ve backed Michael up 100 percent and that would’ve been that.

As their chat wrapped up, Sasha mentioned she had a conference call with Italy. What’s the deal with Italy? Why does GH keep bringing it up? It could mean Sasha will ultimately be asked to move there or will at least decide it’d be better if she did.

Perhaps the Face of Deception will become most successful there. Business might be booming right off the bat and convince Sasha she needs to focus her efforts there.

Is General Hospital setting up Sasha’s exit? It’s definitely an option to consider. Even if it’s a temporary one, they could get Sasha out of the way while they push Michael in Willow Tait’s (Katelyn MacMullen) direction.

General Hospital spoilers say Sasha will deal with some doubts in the weeks ahead. She’ll also open up to Willow at one point, so she may not envision a future with Michael anymore. Sasha thinks Wiley’s a sweet kid and knows how important he is to Michael. She knows they’re a package deal now, but it’s one package she may have to pass up.

Sasha will eventually get emotional along with Michael as they have a difficult discussion. Will that involve a split or at least Sasha leaving for a while? Either way, Sasha could be gearing up for a big move. These Italy mentions are too weird not to pick up on and contemplate.

Do you think Sasha’s on her way out of town? Is Sofia Mattson going to exit General Hospital? As other GH news rolls in, CDL will have more updates. Be sure to check back often for fantastic General Hospital spoilers.