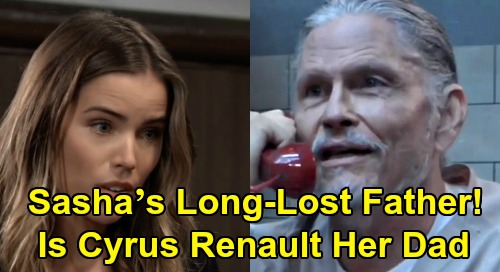 General Hospital (GH) spoilers reveal that there seems to be something GH writers are focusing on these days – and that’s storylines with multiple connections. Cyrus Renault’s (Jeff Kober) stirred up a world of trouble for Sonny Corinthos (Maurice Benard), but he appears to be connected to Jordan Ashford (Briana Nicole Henry) and Marcus Taggert’s (Real Andrews) storyline, too.

Since Cyrus is an international drug trafficker, there’s also the possibility that Cassandra Pierce (Jessica Tuck) is involved here. General Hospital has given some potential clues, so it’s certainly worth considering that Cassandra’s back and tied to all this. Could there be even more story connections?

Let’s consider at least one more that might be interesting for GH to include. Sasha Gilmore (Sofia Mattsson) has spoken fondly of her dead mother before. She also took Valentin Cassadine (James Patrick Stuart) up on his offer to dupe Nina Reeves (Cynthia Watros) because of her sick grandmother.

Sasha needed the money to help pay for her grandmother’s treatment, but she ultimately died anyway.

That left Sasha with no family, which is why it was so appealing for Sasha to play along with the fake daughter scam. She felt like she had family again, even if she didn’t have a real one.

Of course, soap fans know long-lost family members tend to come out of the woodwork. It’s common for a relative to surface – often one that a character didn’t even know he or she had.

What about Sasha’s father? There may be a chance that he’ll pop up some point. Maybe he already has! Could Cyrus be Sasha’s dad? Think about that possible Cassandra connection we mentioned. If Cassandra and Cyrus are allies, Sasha could be an intriguing way to tie all this together.

Cassandra targeted Sasha by injecting her grapefruit on Sonny’s island. She nearly killed Sasha, but Cyrus may not care if he was disowned. He may be fine with targeting Sasha since he seems like the kind of guy that values loyalty.

Then again, Cyrus might hope to reconnect. He may have decided that all’s well that ends well since Sasha survived Cassandra’s plot. Cyrus is a ruthless guy, so he probably wouldn’t let a grudge stand in the way of a profitable business deal. He would still be willing to team up with Cassandra despite her actions against Sasha.

The Corinthos clan, Cyrus, Cassandra and Sasha could all be linked if GH writers want to take it that way. Even if Cassandra’s not part of the equation, Sasha’s the new Face of Deception. The marketing for that’s probably heating up by now, so it’s possible Cyrus tracked her down through that gig.

Regardless, Sasha has no family on canvas and not much has been explored about her past. This would be a good opportunity to give Sasha a little more to work with.

It would also make Sasha a bigger part of this storyline with Michael Corinthos (Chad Duell). Imagine their dads becoming bitter rivals! General Hospital spoilers say the excitement’s about to rev up no matter what, so stay tuned.

Do you think Sasha could be Cyrus’ daughter? We’ll give you updates as other GH news comes in. Stick with the ABC soap and don’t forget to check CDL often for the latest General Hospital spoilers, updates and news.