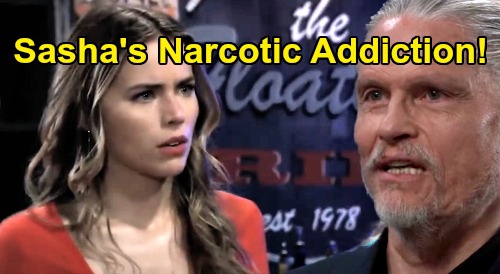 General Hospital (GH) spoilers tease that Sasha Gilmore (Sofia Mattsson) will be under extreme pressure. The blow of Michael Corinthos (Chad Duell) and Willow Tait’s (Katelyn MacMullen) marriage hit Sasha awfully hard, so she’ll struggle to keep moving forward. Sasha’s got a photoshoot to do, but she won’t be prepared for it at all. She’ll be a hungover mess when she finally drags herself to Deception.

Lulu Spencer (Emme Rylan) will pop in on an assignment for The Invader, so she’ll give Maxie Jones (Kirsten Storms) some advice. Maxie will feel like she’s lost all control, but Lulu may think her bestie needs to lay down the law.

It looks like Lulu’s advice will lead to Maxie being even harder on Sasha, so this just won’t be a good situation at all. Maxie will warn that Sasha needs to get her act together or else.

Sasha may fear she’s going to lose her job if she doesn’t shape up and get camera ready immediately. However, Sasha just won’t be in the right frame of mind for this photoshoot. How’s Sasha supposed to plaster on a smile when all she wants to do is crawl in a hole somewhere and cry her eyes out?

It’ll take some convincing, but it seems Sasha will be willing to try anything. If narcotics can help her mask the pain and carry on, Sasha should be willing to dabble in drugs.

The trouble is dabbling can lead to regular usage and ultimately full-blown addiction – especially on soaps. Sasha’s definitely making a risky decision by accepting these narcotics. Later, Harrison Chase (Josh Swickard) will arrive and cross paths with Lulu. After getting thoroughly chewed out, Chase will approach Sasha for a chat.

Chase may wonder how Sasha’s holding up under the circumstances – and the answer is clearly not well! General Hospital spoilers hint that Chase will notice something’s off with Sasha. She’ll apparently be under the influence of narcotics, but Chase may not suspect that. After all, Sasha doesn’t seem like the type to do drugs.

Chase’s mind probably wouldn’t go straight to narcotics, but he’ll inevitably get updates down the road. GH spoilers say Sasha will engage in some reckless activities during the week of May 18-22. Drugs will undoubtedly be part of all Sasha’s wild behavior.

Since we know Cyrus Renault (Jeff Kober) deals in drugs, maybe there’s an opportunity to pull Sasha into his twisted web. There could be some overlap in stories, which would set up some juicy drama later. Regardless, GH fans can expect Sasha to make some choices she’ll regret!