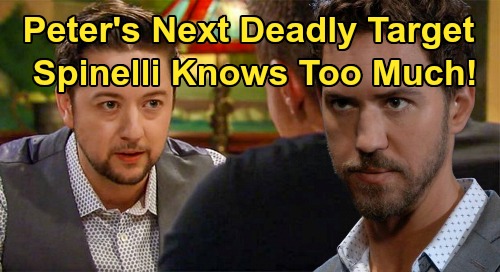 General Hospital (GH) spoilers tease that Peter August (Wes Ramsey) may be his own worst enemy. GH fans know Peter’s desperate to hang onto his relationship with Maxie Jones (Kirsten Storms) and build a life together with James West. However, curveballs keep heading Peter’s way, and the latest one came in the form of Damian Spinelli’s (Bradford Anderson) return to town with Georgie Spinelli (Lily Fisher).

Peter knows Spinelli’s onto him – and that he happens to be on Jason Morgan’s (Steve Burton) speed dial. He’s fully aware that Spinelli’s got the skills necessary to take him down, so that’s already a problem.

Of course, General Hospital spoilers say there’s a bigger issue here, too. Spinelli revealed that if all goes well, he’s hoping to stay in town forever with Georgie and Ellie Spinelli (Emily Wilson).

Ellie’s waiting to hear back about a job in Queens Point, but Spinelli is cautiously optimistic. Since Georgie would be spending a lot of time at Maxie and Peter’s place, Spinelli has every reason to want Peter out of the picture. Peter surely knows Spinelli doesn’t want his daughter hanging out with someone sinister like him.

The fact that Spinelli may be moving home is a game-changer. Peter could even find himself feeling threatened by Spinelli and Maxie’s bond.

Although Peter stepped up to stop his hitman from killing Franco Baldwin (Roger Howarth) and Andre Maddox (Anthony Montgomery), that doesn’t change the fact that he ordered the hit.

It also doesn’t change the fact that Andre was stabbed under Peter’s orders – or the fact that Drew Cain (Billy Miller) is presumed dead because of Peter. Just because Peter changed his mind about Franco and Andre’s latest attack doesn’t mean he won’t turn deadly again.

After all, the stakes are getting higher every day. Not to mention Spinelli could be on the verge of scoring hard evidence for Jason!

What happens if Peter learns Spinelli has that hard evidence? Will Spinelli’s life be at risk, will The Jackal become Peter’s next deadly target? If we go by Peter’s lethal track record, it seems like a good possibility.

Naturally, this would be the perfect way to show Maxie the light when it comes to Peter. If she realizes Peter tried to kill the father of her child, Maxie will see the evil that’s always been lurking beneath the surface.

General Hospital spoilers say Spinelli will do his best to help Jason and Sam McCall (Kelly Monaco), but it sounds like he’s headed into dangerous territory. Spinelli could become a deadly target soon enough! We’ll give you updates as other GH news comes in. Stay tuned to the ABC soap and don’t forget to check CDL often for the latest General Hospital spoilers, updates and news.