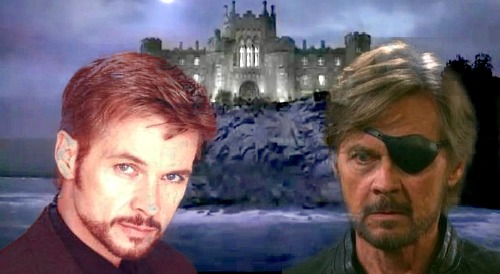 General Hospital (GH) spoilers reveal that a recent character mention has fans hoping another Cassadine might reenter the mix. In the September 9 episode, GH fans watched Bobbie Spencer (Jacklyn Zeman) march up to Valentin Cassadine (James Patrick Stuart) and blast him for being worse than Stefan Cassadine (Stephen Nichols).

Later, Valentin assured Martin Gray (Michael E. Knight) that he was nothing like Stefan. Valentin argued that Stefan was a man consumed by his ghosts, but Valentin doesn’t believe in ghosts at all – at least that’s the story he’s trying to sell Martin!

It wasn’t that long ago that Valentin had a conversation with Helena Cassadine’s (Constance Towers) ghost or at least some ghostly version he created in his head.

To Valentin’s credit, he’s rebuilt his life and moved on following the revelation that he wasn’t a true Cassadine. Even so, the Stefan mentions were interesting. Could General Hospital have some sort of comeback brewing? Is Stefan alive or could he potentially return in ghost form?

Stephen Nichols plays Steve Johnson on Days of Our Lives, but no one can know the contract situation with certainty right now after the extended hiatus.

Regardless, it’s possible for a soap star to appear on both GH and Days since Wally Kurth does double duty as Ned Quartermaine and DOOL’s Justin Kiriakis. At one point, Kurth did that while on contract at Days, though his status has since changed.

It’s at least worth considering the idea that Stefan might come back from the dead to shake things up. Of course, General Hospital could recast the role of Stefan if need be. There were rumblings about a Stefan Cassadine storyline potentially being in the works a couple years ago, but nothing ever materialized.

Maybe GH was finally able to lock in their plans if this dialogue is supposed to be a hint of what’s to come. Whatever the case, some General Hospital fans grew excited about the possibility on social media. It’s clear that plenty of viewers would like to see Stefan again in some form.

“Stefan was mentioned TWICE today! Maybe if someone says his name a third time he’ll appear like Beetlejuice!” one GH fan said on Twitter. “Ohhh Stefan mention,” said another.

One more viewer recently tweeted, “The way soap characters come back from the dead, Stefan would be a real easy one to write! There is so much story still to be told!”

What do you think about the Stefan mentions on GH? Would you like to see Stefan Cassadine return? As other GH news rolls in, we’ll pass along updates. General Hospital spoilers say some twists and turns are ahead no matter what, so stay tuned.