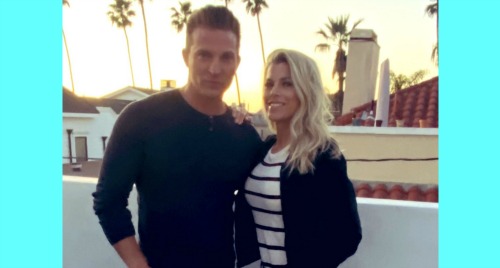 General Hospital (GH) spoilers has some fun news to pass on about a popular GH star. Steve Burton, who portrays Jason Morgan on the ABC soap, recently posted a sweet Valentine’s Day update with his social media followers. It looks like Steve and his wife Sheree Burton had an evening out for the romantic holiday.

Steve posted a photo of himself and Sheree on Twitter, along with the following message: “A great V-Day with this amazing woman. #grateful #blessed #lit.” They look like they were either headed out for a nice dinner or returning from their celebration, but either way they look happy and content.

Steve and Sheree have recently celebrated their 21st wedding anniversary, and if you’re fortunate enough to follow either or both of them on social media, you know that they frequently post about what they’re up to together and what’s going on with their beautiful family. They’ve got three kids – Brooklyn, Jack, and Makena – who occasionally show up in their feeds as well.

Steve’s Twitter followers have been responding to his post with their well-wishes and comments on how happy and nice the couple looks. One person commented: “What a beautiful couple. You are both blessed.” And another said: “Awww, glad you two had a great Valentine’s Day!”

Of course, Steve’s character Jason probably didn’t have the best Valentine’s Day. He’s currently separated from his significant other Sam McCall (Kelly Monaco) due to the terms of her parole. As GH viewers know, she was framed by Peter August (Wes Ramsey) and sent to prison for the murder of Shiloh Archer (Coby Ryan McLaughlin). But now she’s out on parole, and her parole officer has a big stipulation – stay away from Jason.

It’s certainly causing the couple a considerable amount of angst, and they were nearly caught together at GH by the parole officer. Luckily Epiphany Johnson (Sonya Eddy) stepped in and saved Sam and Jason from being totally busted. But the parole officer isn’t going to let up on Sam, so something’s going to have to give.

At any rate, it’s great to see Steve and Sheree out and about and enjoying their Valentine’s Day. We hope their date night was great! Check back with CDL for all the latest in General Hospital recaps, spoilers, and news.